Wombat: A short-legged, muscular quadrupedal marsupial that is native to Australia.

There are three species of wombats: The common wombat (Vombatus ursinus), the Southern hairy-nosed wombat(Lasiorhinus latifrons), and the Northern Hairy-Nosed Wombat (Lasiorhinus krefftii). 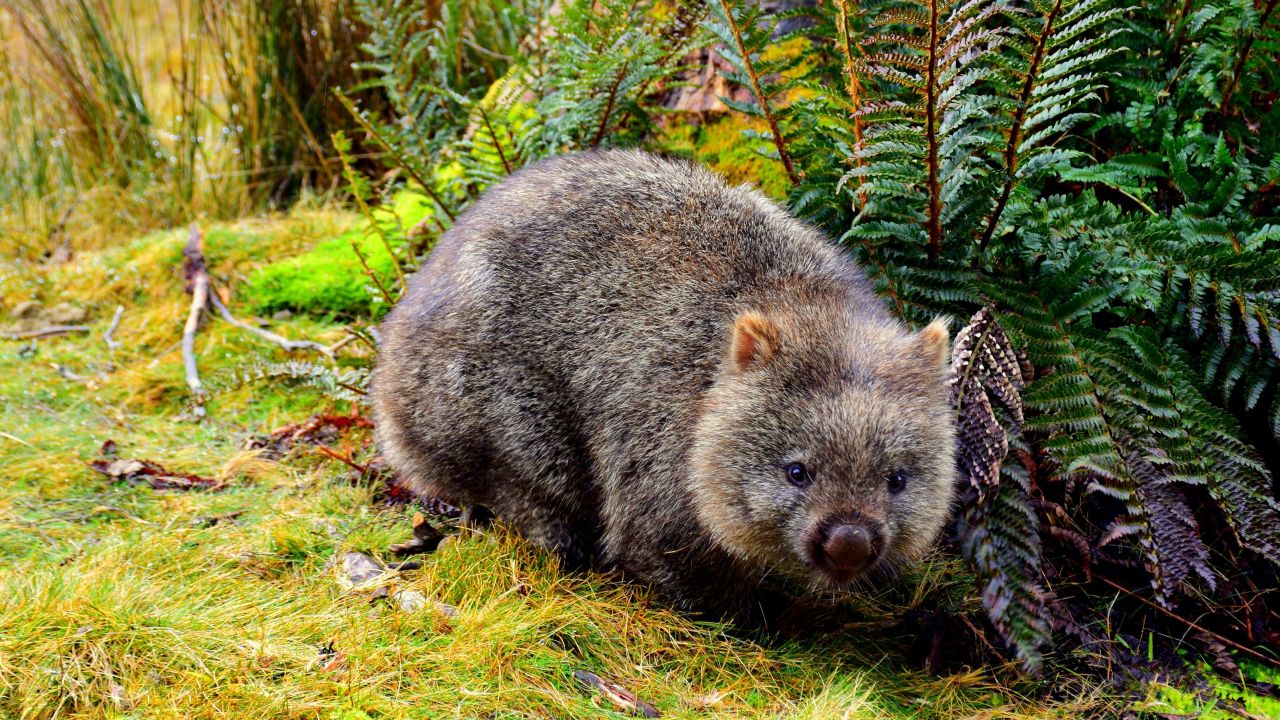 On average, wombats are 3.3 feet long and weigh 55 to 88 pounds. The wombat is the world’s largest burrowing animal and the second-largest marsupial after some species of kangaroo.

While wombats look like short, stocky bears, they are actually marsupials, related to koalas and kangaroos. Unlike other marsupials, their pouch is rear-facing. The backward-facing pouch is an advantage to a digging wombat because it prevents the pouch from being filled with dirt. They have long, thick claws which have evolved to allow them to become powerful diggers. Wombats are known to be expert diggers that create extensive burrows with multiple chambers.

Depending on the species, they are either sandy brown or grayish black. Their coloring is used to help them to blend in with the landscape and avoid predators. The common wombat has coarse fur and short, round ears. The two species of hairy-nosed wombats have soft fur and much larger ears. Wombats may have a cute, teddy bear-like experience, but do not let their appearance fool you, they are known to be aggressive when they feel threatened.

Wombats are completely herbivorous, eating grasses, plants, herbs, roots, bark, and mosses. They spend most of their time grazing, using their rodent-like teeth and very strong jaws to grip and tear their food. Wombats have a special stomach gland that helps them easily digest these tough foods. They don’t need to drink much water, as they get most of their water from the plants they eat. They are nocturnal animals so they can often be found grazing at night. 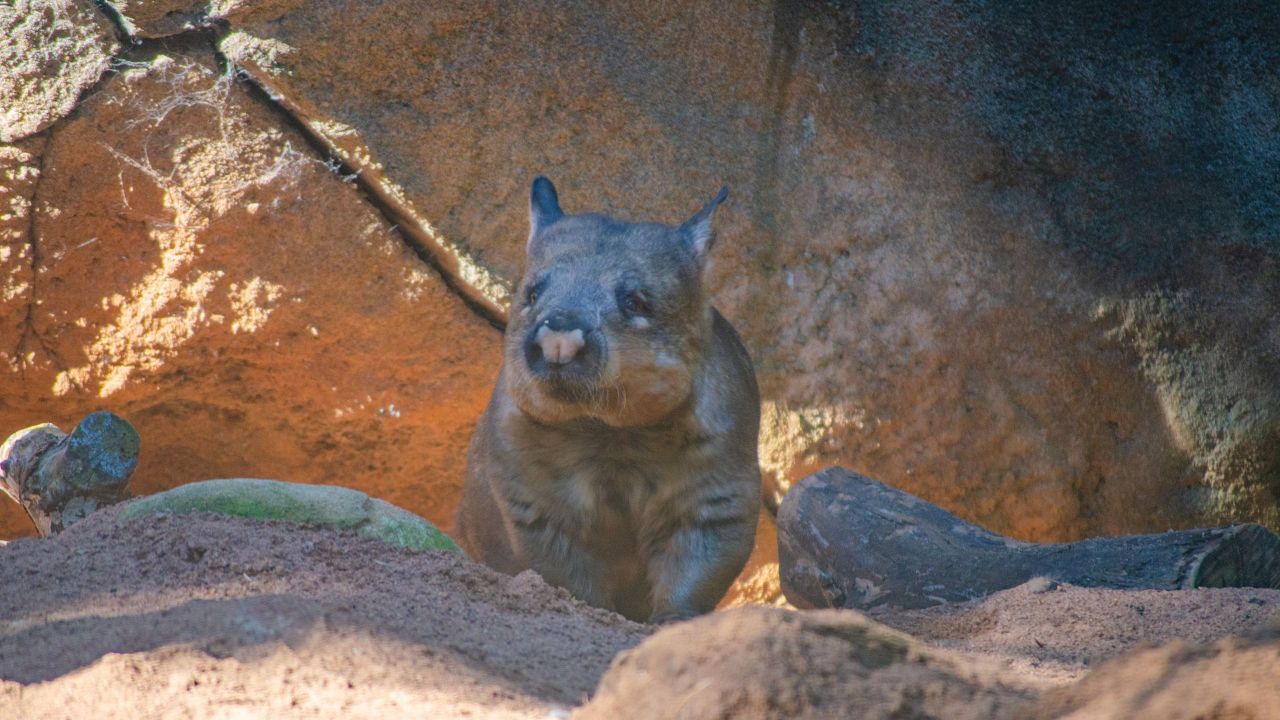 Wombats live in the woodlands, coastlands, mountain forests, and shrublands of southeast Australia. Wombat burrows, which can be 10 to 100 feet long and 11.5 feet deep, are highly complex, with interconnecting tunnels, designated sleeping chambers, and sometimes several entrances and exits. Wombats have different burrows for different purposes. Some house only one or two wombats, some house family groups. Wombats may also be sociable, visiting each other’s burrows. The burrows are also sometimes used by other species, such as wallabies, rabbits, foxes, and lizards. 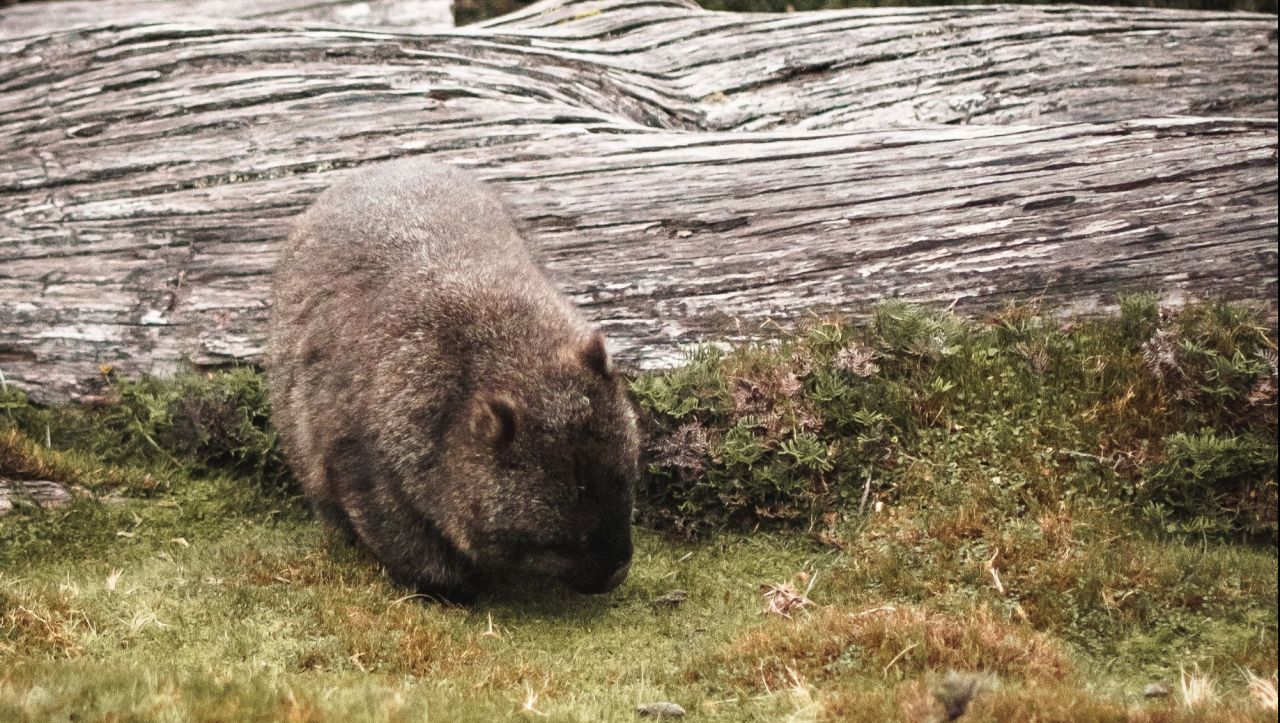 Wombats reach sexual maturity around 18 months old. After a gestation period of roughly 20 to 30 days, a female wombat gives birth to a single young, called a joey. On average, female wombats give birth every two years. The mother will carry her newborn in a pouch, like all marsupial females. However, a female wombat’s pouch opens towards her rear, not her head like other marsupials, such as kangaroos.

At birth, the joey is not yet fully developed. It weighs only 0.25 ounces and is only 0.5 inches. The newborn must crawl from the birth canal to the mother’s pouch and attach itself to a nipple. The joey will not peak itself out of the pouch until it is 6 months old and will not leave the pouch until it is 9 to 10 months old. The joey is weaned from its mother after about 12 to 15 months.

Some wombats are social while others are loners, depending on the species. For example, common wombats tend to be solitary and inhabit their own burrows, while the two other species tend to be more social and live together in larger burrow groups of 10 to 15 wombats. A group of wombats is known as a wisdom, a mob, or a colony.

The northern hairy-nosed wombat is critically endangered, with just over 100 individuals remaining. All of the remaining individuals are found in Epping Forest National Park in eastern Australia. The largest threats to the species are predation by wild dogs, competition for food because of overgrazing by cattle and sheep, and disease.

In the early 1900s, the Australian government declared wombats pests and encouraged people to kill them. Approximately 63,000 wombat skins were redeemed for cash between 1926 and 1965. Since that time, this practice has stopped and wombat conservation has gained importance. The common wombat and southern hairy-nosed wombat populations are more stable than that of the northern hairy-nosed wombat. However, all three species face a number of threats, including land clearing, habitat competition with cattle, poison bait set out for rabbit control, drought, road deaths, predation and disease.

All three species of wombats are protected in every Australian state. There are also a number of conservation groups working to protect all three species by raising awareness, conducting research and protecting wombat habitats.

Sources: the San Diego Zoo and a previous NATURE post.