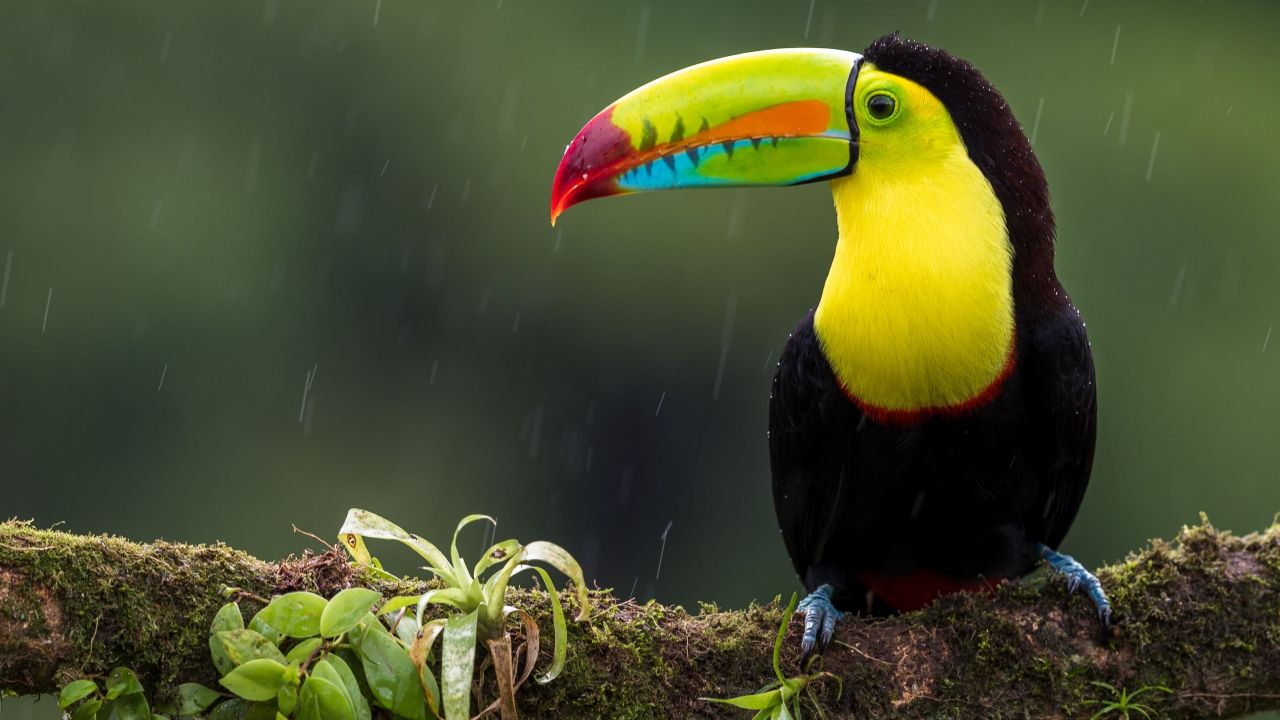 The toucan family includes five extant genera and over 40 different species. Some of these birds have names like aracari or toucanet, but they all sport that large, comical bill. 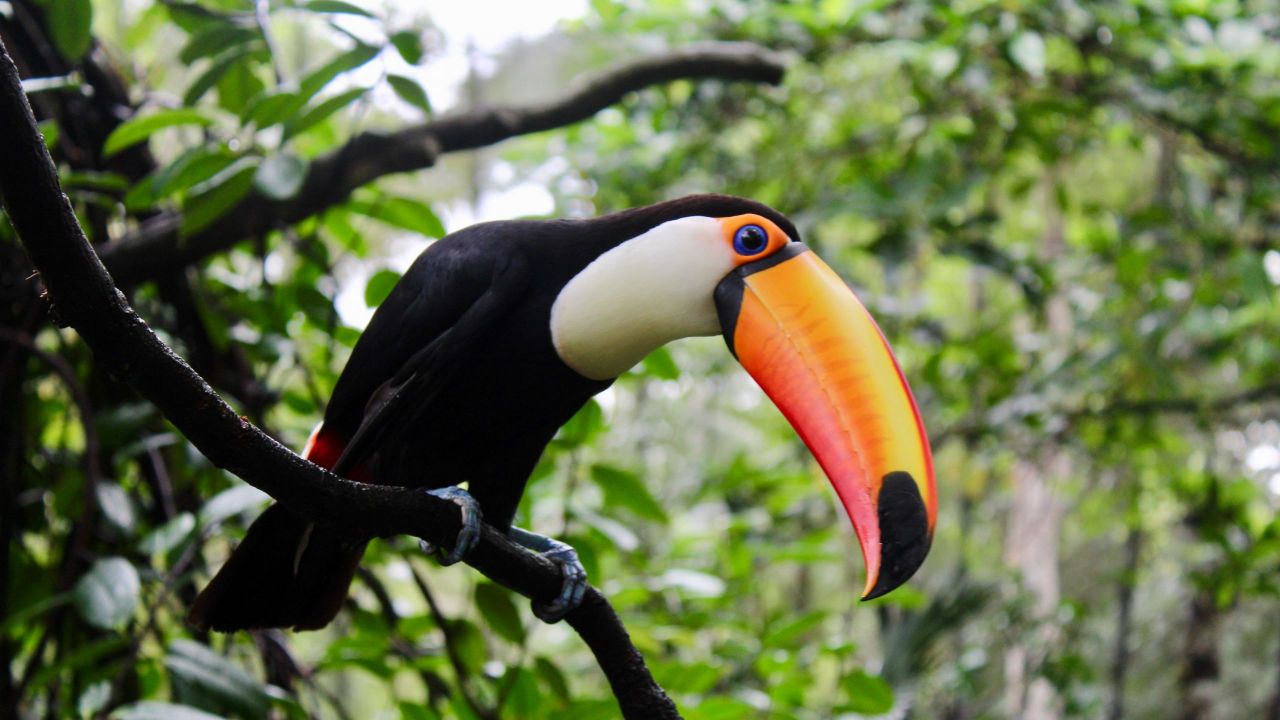 Toucans are best known for their large, colorful bills, which can be four times the size of their head. They use their beak to reach food far out on branches or deep into tree cavities. Finding and catching food is aided by a toucan’s long tongue, which can measure up to 5.9 inches. Aside from gathering food, their infamous beak may all be used to attract potential mates and scare away predators. Despite the beak’s large appearance, their beaks are light and hollow, aside from a network of bony fibers that run crisscross through the top for strength and support. It is made of keratine, like human hair and fingernails.

A toucan’s colorful feathers provide camouflage in their tropical habitat, where they are able to blend in with the colorful plants and vegetation. They have short and compact bodies, a rounded tail, and a short, thick neck. Their legs are strong and short. They have small wings, so they need to flap their wings a lot to fly. To conserve energy, they are more often found sitting in trees than flying. 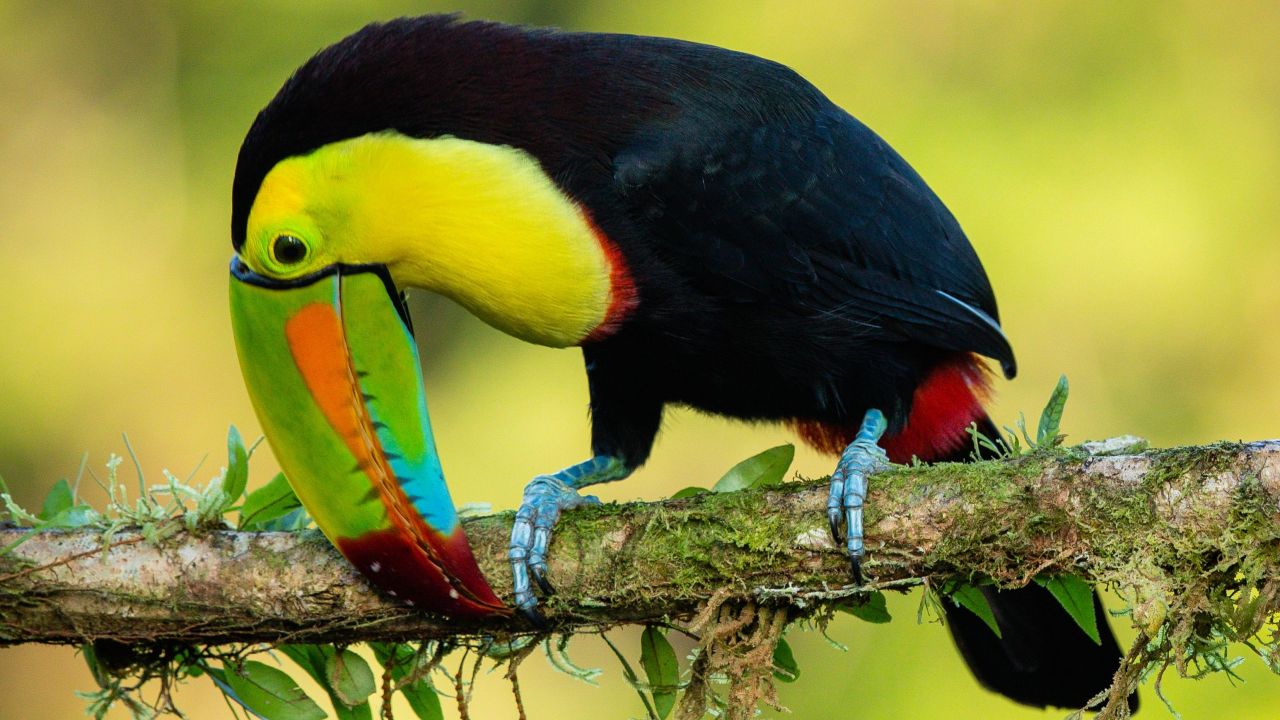 Toucans are primarily frugivores, meaning they feed mostly on raw fruits or succulent fruit-like produce of plants such as roots, shoots, nuts and seeds. Toucans typically begin their day with early morning visits to fruiting trees in their home area before making longer journeys in search of new fruit sites. They are also known to catch insects, small reptiles, bird eggs and fish. Their large bill has serrated edges, which help them catch, grasp, and even skin whatever they might be eating.

Toucans can be found high in the rainforest canopies, and they rarely make trips to the forest floor. They typically create their nests in hollowed-out tree cavities.

Toucans can be found in Central and South America. 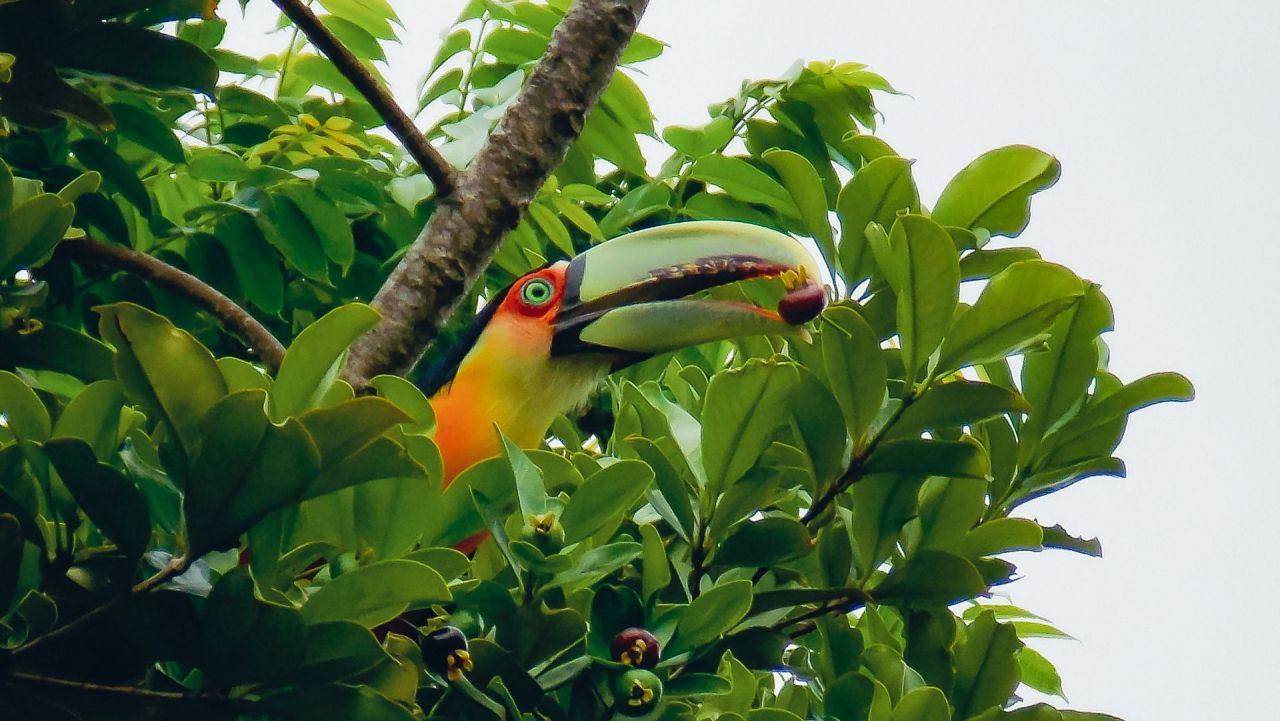 Toucans typically breed during the spring and are believed to be monogamous, at least throughout the breeding season and while rearing the young. A female lays one to five eggs, depending on the species, in her nest. Both the male and female incubate the eggs for 15 to 18 days. The chicks are very vulnerable once hatched with their eyes closed and skin bare. For the first few weeks, they are completely dependent on their parents for survival. By three weeks of age, their eyes open and feathers begin to appear. They remain in their nest for six to eight weeks. Toucans reach maturity between 3 to 4 years, depending on the species.

Toucans are social species that travel in loose flocks of up to 22 individuals. 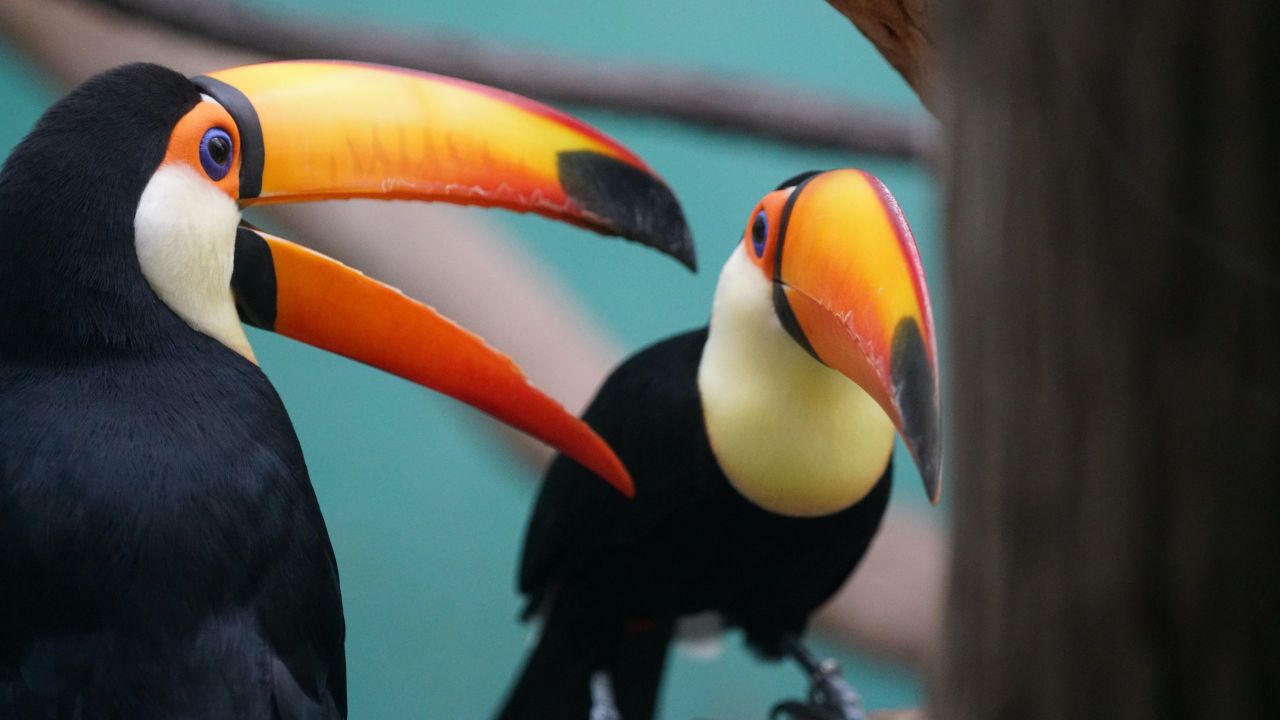 While their lifespan is unknown in the wild, they are known to live up to 18 years in expert care.

Habitat loss is the largest threat to toucans. Their rainforest home is being cut down for human use, such as for infrastructure and farmland. Humans are a major threat to toucans, as they are still hunted in parts of Central America and the Amazon region. They are captured for the pet trade or for use as stuffed trophies to hang on a wall.

Toucans also have several natural predators, including forest eagles, hawks, owls, boas, jaguars, and margays. To protect themselves, toucans use their enormous bill. They also use their loud voices to scare off enemies and alert other toucans to the danger. 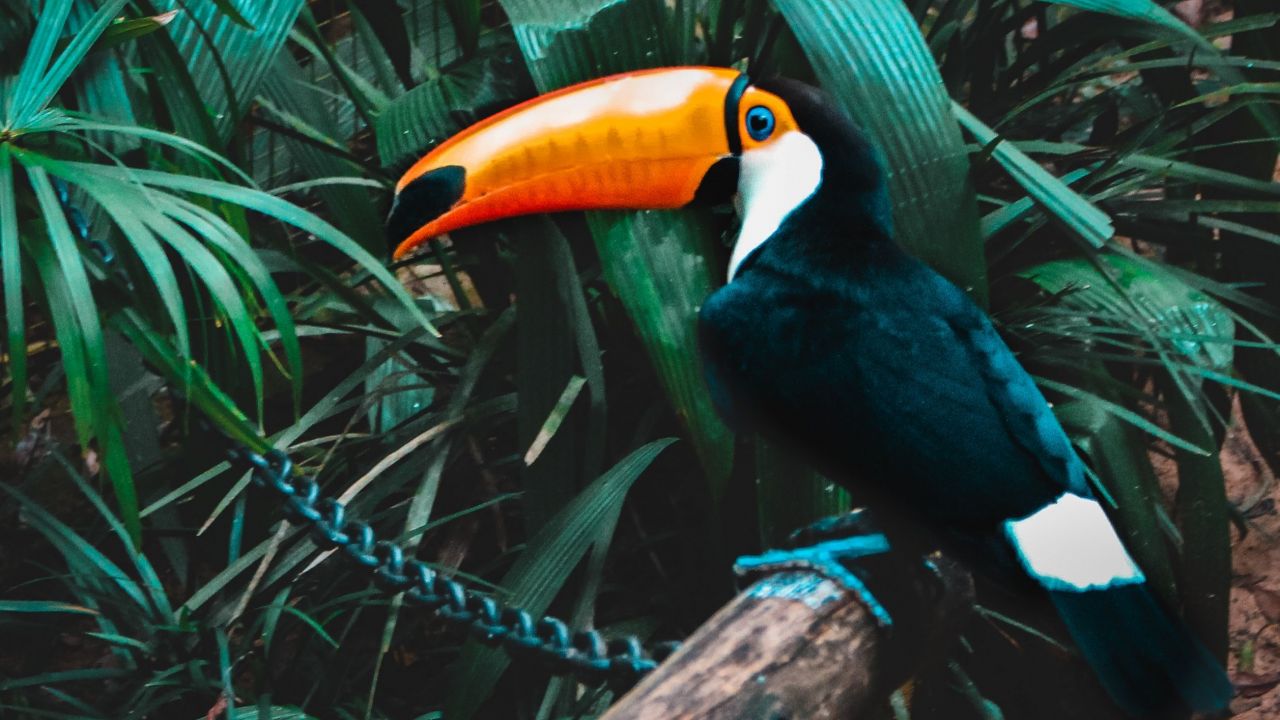 There are several conservation groups working to protect the various species of toucans by protecting their habitat.