Today is World Lion Day. This blog comes to us from WCS (Wildlife Conservation Society) as an update to this post about Jacob the three-legged lion. 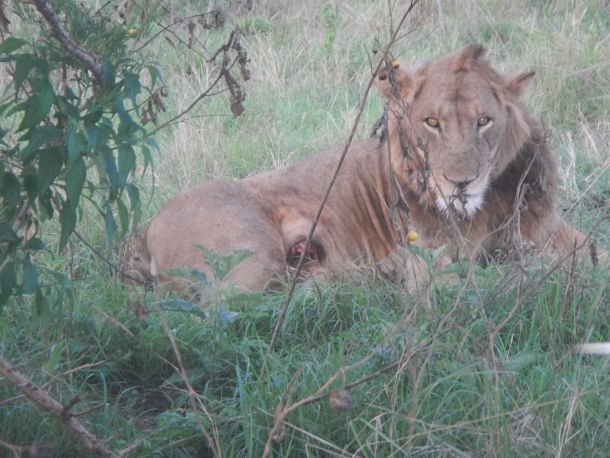 Jacob resting with a gaping wound on his belly caused by a buffalo he encountered during a hunting experience. Photo credit: Bazil Alidria/WCS

Jacob is one of eleven lions in Uganda’s Kyambura Wildlife Reserve and Queen Elizabeth National Park that were fitted with GPS satellite collars in 2018. The collars enable WCS (Wildlife Conservation Society) to monitor the lions’ movements in real-time and minimize fatalities caused by poaching and human-wildlife conflict.

One such collar enabled the research and monitoring team to locate Jacob and save his life after he stepped into a poacher’s trap that snapped off his hind leg. In spite of this injury, Jacob has beaten the odds to hunt in the wild with only three legs. However, on the morning of April 5, 2021, as part of its routine monitoring, the research and monitoring team found Jacob with another physical injury—a gaping and bleeding wound on his belly.

Jacob was in bad shape due to the deep perforated wound in the umbilical area as well as some injuries on the abdominal muscle. Some intestine had passed through the hole, causing tissue strangulation at the opening. 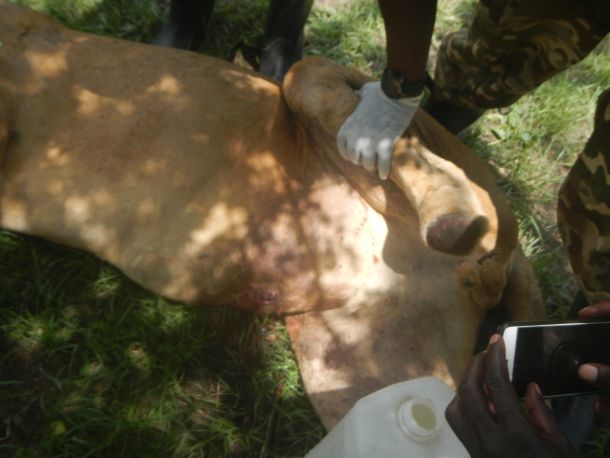 Jacob had suffered a deep perforated wound in the umbilical area as well as some injuries on the abdominal muscle. Photo credit: Bazil Alidria/WCS

“This was a physical injury, most probably caused by a buffalo that impaled him when he attempted to kill it for food,” explains Dr. Enyel who moved the intestine back inside, cleaned the wound, and closed the hole by stitching. He also gave Jacob a long-acting antibiotic to avert further infections.

Jacob was lucky. A fellow lion, Saleh, was less fortunate. Saleh was first spotted limping in the southern part of Queen Elizabeth National park. His leg had been chopped off by a wire snare at the knee. Unfortunately, after treatment, Saleh could not keep up with the pace in the rest of his pride. He refused to eat wild game provided by rangers or his own pride.

This meant that Saleh could not be given antibiotic capsules, which are usually placed in a chunk of wild meat. He continued to grow weak until one day, a buffalo impaled and badly damaged the lower part of his spine, immobilizing him. In examining Saleh, the team discovered that the injury was irreversible and decided to euthanize him. 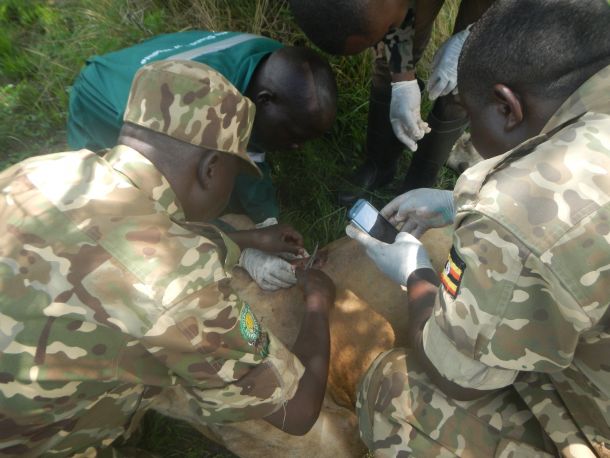 According to Dr. Enyel, “The balance of power plays out when a hippopotamus or buffalo finds an injured lion. They often kill or injure it, while others seek out lion cubs and kill them instinctively to reduce the threat of future predation. It can be a traumatic experience for both the remaining lions in the pride and the people trying to save them.

Today on World Lion Day, snares threaten a species facing growing losses in Africa. According to the International Union for Conservation of Nature (IUCN) 2015 Red List assessment, lion numbers declined by 43 percent between 1993 and 2014. Yet this conceals a far more severe decline across West, Central, and East Africa combined, where losses are estimated at 60 percent since 1993.

To reduce this threat, WCS—in collaboration with Uganda Wildlife Authority with funding support from Lion Recovery Fund (LRF) and other donors—is removing poachers’ traps in Queen Elizabeth National Park and Murchison Falls National Park to save lions and other wildlife.

According to Bazil, “The traps are dangerous because they kill animals indiscriminately. Even rangers can get trapped if they do not conduct patrols carefully. The most dangerous are the wheel trap (the local name for ‘leghold trap”), which can chop off a human’s leg, and the pit trap, which can kill a human being”.

To counter poaching of wildlife, WCS equips rangers and protected-area managers with a spatial monitoring and reporting tool (SMART). The tool can be operated via an android phone to collect real-time data on illegal activities in parks and wildlife reserves and prevent such activities through ranger patrols. 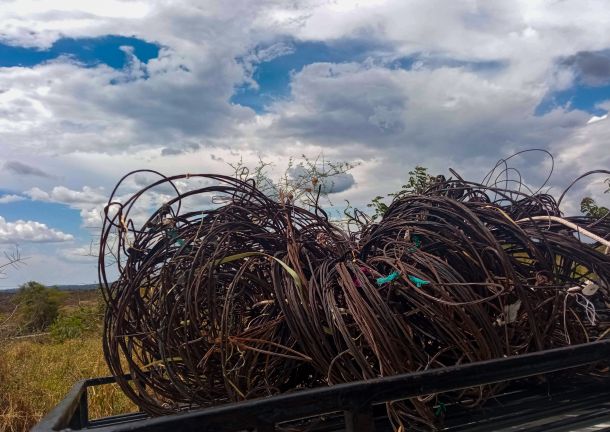 The SMART data is then analyzed to identify hotspots of illegal activities. From that data, we generate reports to enable park management to target resources efficiently, deploy rangers to areas with a high concentration of illegal activities, and avert wildlife losses.

Since 2018, WCS has helped to remove 3,000 wire snares, traps, and tools such as spears and pangas (machetes) from these two critical lion conservation parks. Although several dead animals have been occasionally encountered and poachers sighted, there have also been several arrests and prosecution of poachers.

According to Dr. Simon Nampindo, WCS Uganda Country Director, “the SMART tool has helped UWA to improve law enforcement and combat wildlife crime in Uganda’s 10 national parks and 12 wildlife reserves. It has also helped UWA to reduce the cost of conducting law enforcement in some of the national parks where it is used well and increased the wildlife crime prosecution success due to the admissibility of SMART information in courts of law”.

WCS continues to leverage the GPS-satellite collar to track Jacob and other lions, as well as SMART to physically search and systematically remove snares and traps. Without this technology, Jacob would not have been found and treated promptly. Jacob’s wound has now healed and he is back to attempting to hunt and survive the wild with his handicap.

The post Snares Pose a Grave Threat to Lions in Africa Today appeared first on Nature.