Sea lions are often confused with seals. While sea lions and seals, along with walruses, are in a scientific group of mammals called pinnipeds, the two marine mammals can be told apart by their ears. Sea lions have a small earflap on each side of their head, while seals just have a tiny opening for their ears. 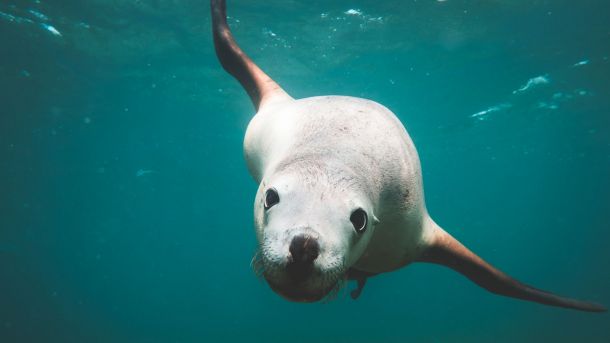 Female sea lions weigh 110 to 600 pounds and males weigh 440 to 2,200 pounds. In length, female sea lions measure 4 to 9 feet and males measure 6.5 to 11 feet. Their size and weight vary depending on the species. The northern sea lion is the largest of all the species, with the males up to three times larger than the females.

Sea lions are characterized by external ear flaps, long fore flippers, and a big chest and belly. They have short, thick fur, covering a thick layer of blubber that helps to keep them warm in the ocean. They have adapted features that help them to thrive on land and at sea. For example, the flippers at the end of their limbs help them to swim. Sea lions are able to rotate their hind flippers forward to help them scoot around on land.

Their appearance varies slightly depending on the species. For example, the northern sea lions are the largest species, with males up to three times larger than females. The males have thick, hairy necks. This species coloring ranges from light buff to reddish-brown. The southern sea lion can be distinguished from others by its shorter and wider muzzle. These sea lions tend to be dark brown with a yellow belly. Adult male Australian sea lions have a white to yellowish mane against a very dark brown body. The Auckland sea lion is slightly smaller than the Australian sea lion and has a black or very dark brown coat. 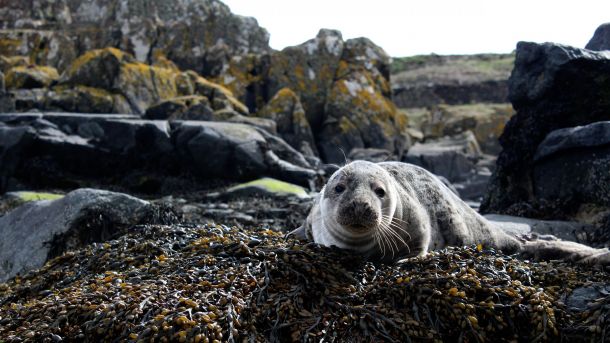 Sea lions are carnivores, eating fish, squid, crabs, and clams. The largest species, the northern sea lion, also eats seals. They are known to consume large quantities of food at a time, about 5 to 8% of their body weight, 15–35 pounds, at a single feeding. Sea lions do not need to drink water to survive as their food consumes all the water they need.

While they have teeth, sea lions often swallow their food whole. If needed, they’ll use their flat back teeth to crush food, like shells, before swallowing. They typically use their sharp canine teeth for protection.

Sea lions can be found along the coastlines and islands of the Pacific Ocean. They are adapted for life on land and at sea. They have strong front flippers that support them on land and also help regulate their body temperature. Their sleek body helps them to make deep dives to catch prey, up to 600 feet. They are strong swimmers that can reach speeds of 18 miles per hour. They are able to stay underwater for 10 to 20 minutes at a time with the help of their nostrils, but they must come up to breathe. 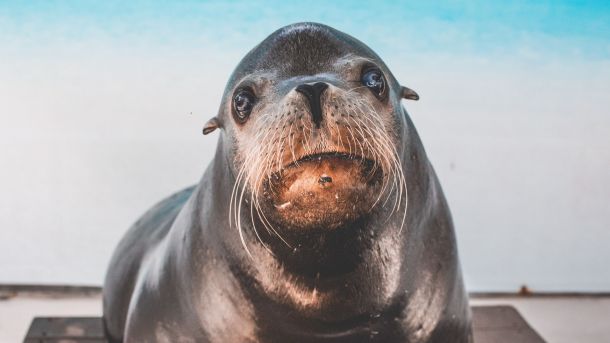 Sea lions can be found along the coastlines and islands of the Pacific Ocean. Their range varies depending on the species.

The Hooker’s sea lion is found along New Zealand’s coastline and has the smallest range of any sea lion. Its neighbor, the Australian sea lion, can be found along the western and southern coast of Australia. The southern sea lion is found along the western and lower eastern coasts of South America and the Falkland Islands. Galápagos sea lions live in the Galápagos Islands. California sea lions are found on the coasts of Japan and Korea, western North America from southern Canada to mid-Mexico, and the Galápagos Islands. The Steller’s sea lion ranges from the Central California coast north to the Aleutian Islands and along the coast of eastern Russia south to South Korea as well as Japan.

In most species, male sea lions called bulls will leave the sea first to stake out a territorial claim on the land. Prior to the breeding season, the bull will feast on extra food to create extra blubber, so he can sustain himself and guard his territory for weeks. The bulls bark loudly and intimidate each other through stares and head shakes while defending their territory.

Weeks or days after the bulls have established their territory, the breeding females will follow the bulls to the territory. Female sea lions that conceived the year before are the last to arrive, gathering on land to give birth to their pup. Each bull will try to gather as many female sea lions called cows as possible to form his “harem,” or family group. These harems can grow to up to 15 cows and their young. Bulls tend to be very protective of their harem. These breeding spots are typically made up of multiple harems.

After a gestation period of 8 to 18 months, depending on the species, the female sea lion gives birth to a single pup or two pups on rare occasions. At birth, pups weigh 13 to 48 pounds and measure 2 to 3 feet in length, depending on the species. They’re born with their eyes open and a long, dense coat of hair called the lanugo. The lanugo helps keep them warm until they develop blubber, which they will develop from drinking their mother’s fat-rich milk.

Pups are able to walk soon after giving birth, approximately 30 minutes. They begin swimming and fishing at just a few weeks olds. The mother will continue to nurse her pup until he is about six months old. The pup may stay with its mother for up to one year. Female sea lions reach sexual maturity between 3 and 8 years old, while males reach sexual maturity between 6 and 10 years old. 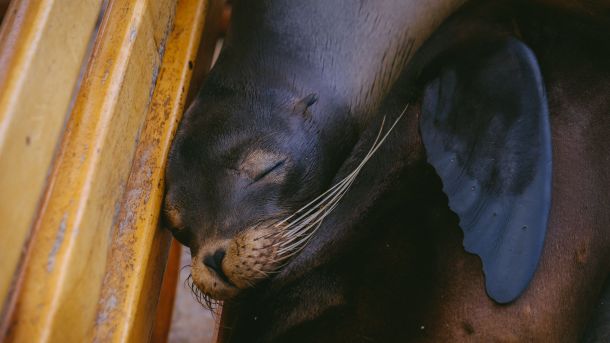 Sea lions are social animals that often gather during the breeding season, preferring sandy beaches for their rookeries. The male sea lions will form harems of up to 15 cows and their young. These groups will often lay close together, or even on top of each other, at their breeding site.

Sea lions tend to be a noisy group, making all sorts of barks, honks, trumpets and roars to communicate with each other. A pup can pick out its mother from among hundreds gathered on rocky shores just by the sound she makes.

The lifespan of a sea lion ranges from 20 to 30 years. 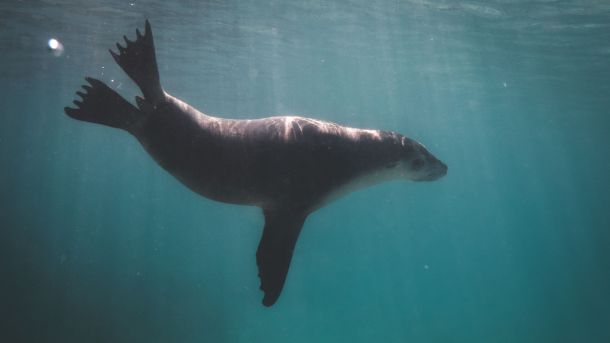 Commercial fishing is a large threat to sea lion populations, as they may be victims of bycatch. Commercial fisheries may have also have an impact on their food supply. Fishermen have killed sea lions because they believe that sea lions damage their nets and other gear.

Climate change is another threat to sea lion populations, as it impacts their prey abundance. Pollution is another major threat to sea lions. During algae blooms called red time, a neurotoxin called domoic acid is produced by algae. Fish eat algae, and sea lions eat these fish. High levels of domoic acid can lead to lethargy, seizures, and death. Pollution likely has a significant role in these toxic algae blooms.

Introduced species like dogs carry diseases that can spread to sea lions. In the past, sea lions were hunted for their meat, skin, and oil. Some people even used sea lion whiskers for pipe cleaners. There are now laws to prevent these killings, but there may still be incidences of this criminal behavior. 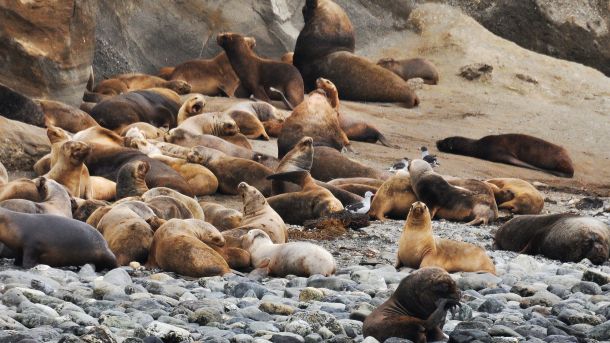 Sea lions on a beach. Credit: Johny Rebel on Pexels.

Three species are listed as Endangered: the Australian sea lion, the Galápagos sea lion, and the Auckland sea lion. While the northern sea lion was “endangered,” numbers are increasing and it is now listed as “near threatened.”

Conservation groups are working to protect sea lion species. Northern sea lions’ numbers dwindled due to the impacts of commercial fishing. In order to protect this species, protective zones and other measures were implemented around their rookeries. Other sea lion species are at risk due to similar threats. All sea lions are under the protection of the Marine Mammal Protection Act.

Pollution is a major threat to the species. There is a correlation between harmful toxic algae blooms and the lack of recycling. Pollution is also a threat because it can entangle marine life or cause them to choke. Conservation groups like the San Diego Zoo Wildlife Alliance advocate for recycling and keeping plastic out of the oceans.