Salmon: the common name for several species of ray-finned fish in the family Salmonidae.

There are seven species of Pacific salmon. Five of them occur in North American waters: chinook, coho, chum, sockeye, and pink. Two of them occur only in Asia: Masu and amago. There is also one species of Atlantic salmon. 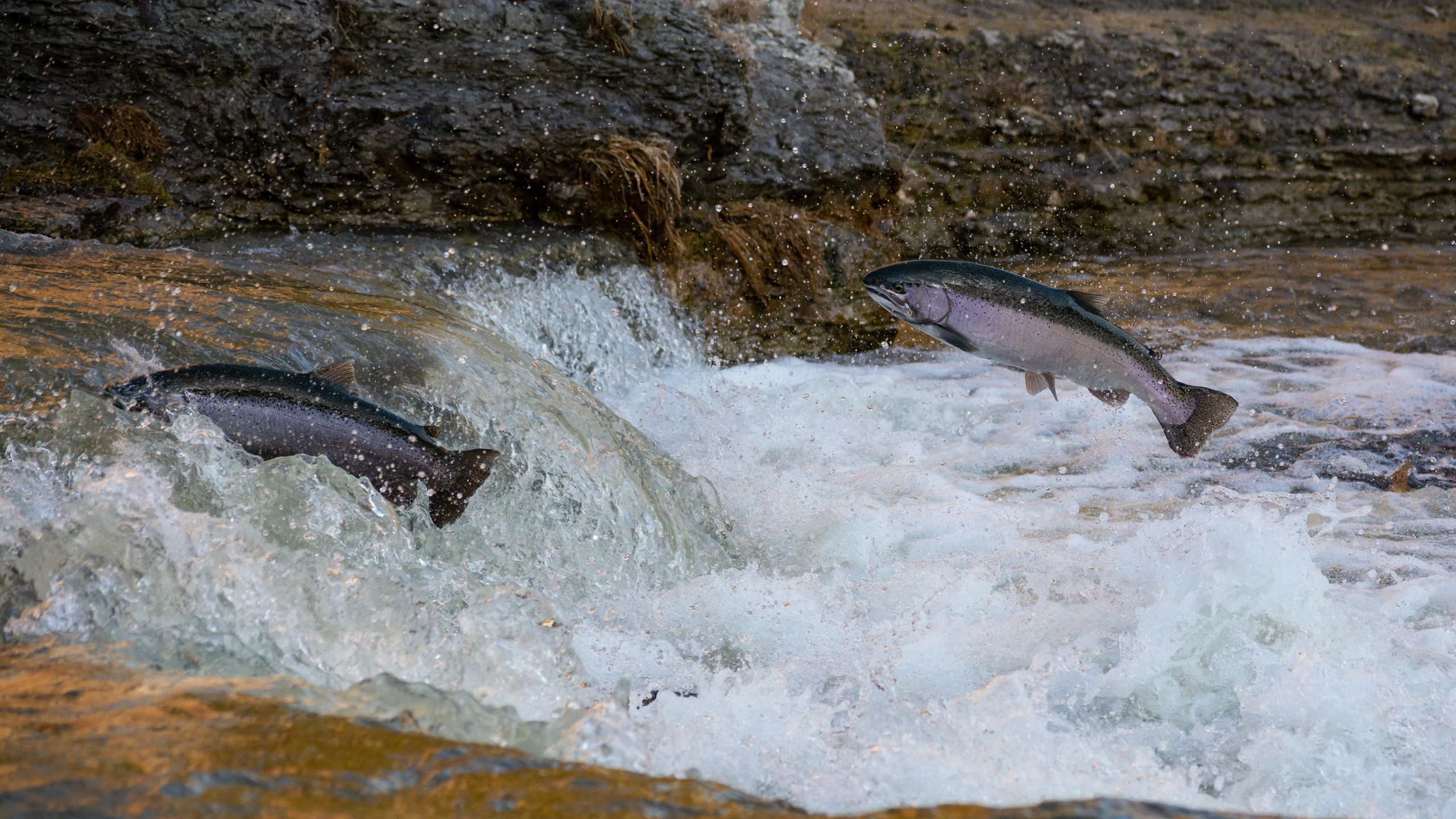 The size and weight vary depending on the species. The length of a mature salmon can range from between 20 inches to almost 5 feet. Adult salmon can weigh anywhere between 3 pounds to over 100 pounds. Chinook salmon are also the largest of the species, with the heaviest recorded weighing 126 pounds. Meanwhile, pinks are the smallest of Pacific salmon with an average weight of 3.5 to 4 lbs.

Their appearance varies depending on the species. They are relatively thick-bodied with a torpedo-like shape that narrows at the head and the tail. Most species have elongated hook-like mouthparts. Their scales often have a silver color and some also have red coloration as well.

During the mating season, their appearance changes to attract a spawning mate. Males often have brighter coloring than females. Depending on species, many males also develop humps and hooked jaws, known as kypes. For example, sockeye salmon turn bright red on their body, and olive green on the head. The males develop a prominent hump in front of the dorsal fin, their snout becomes elongated, and their canine-like teeth grow out of the receding gums. Meanwhile, females undergo a distinct color change but retain their body shape, according to the Washington Department of Fish and Wildlife (WDFD). 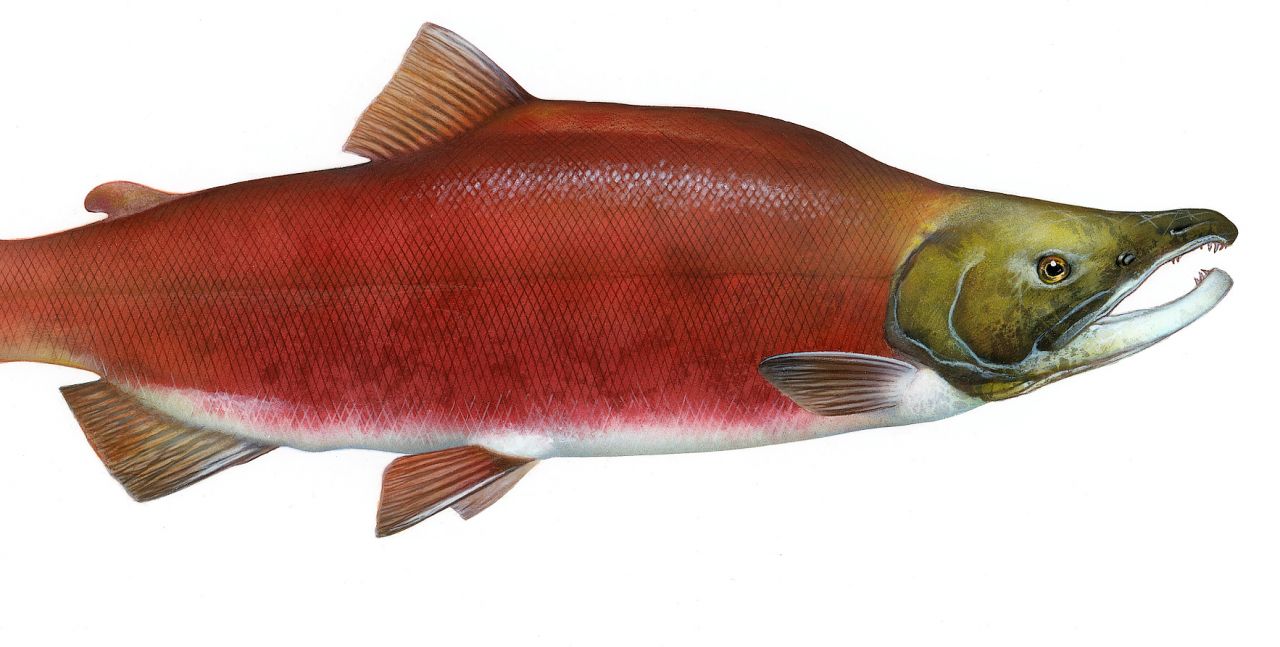 Young salmon feed on small aquatic insects and zooplankton. As salmon grow and mature, they feed on larger animals including shrimp, eels, and smaller fish. Unlike other species of Pacific salmon, zooplankton makes up the majority of the sockeye diet throughout their lifecycle. 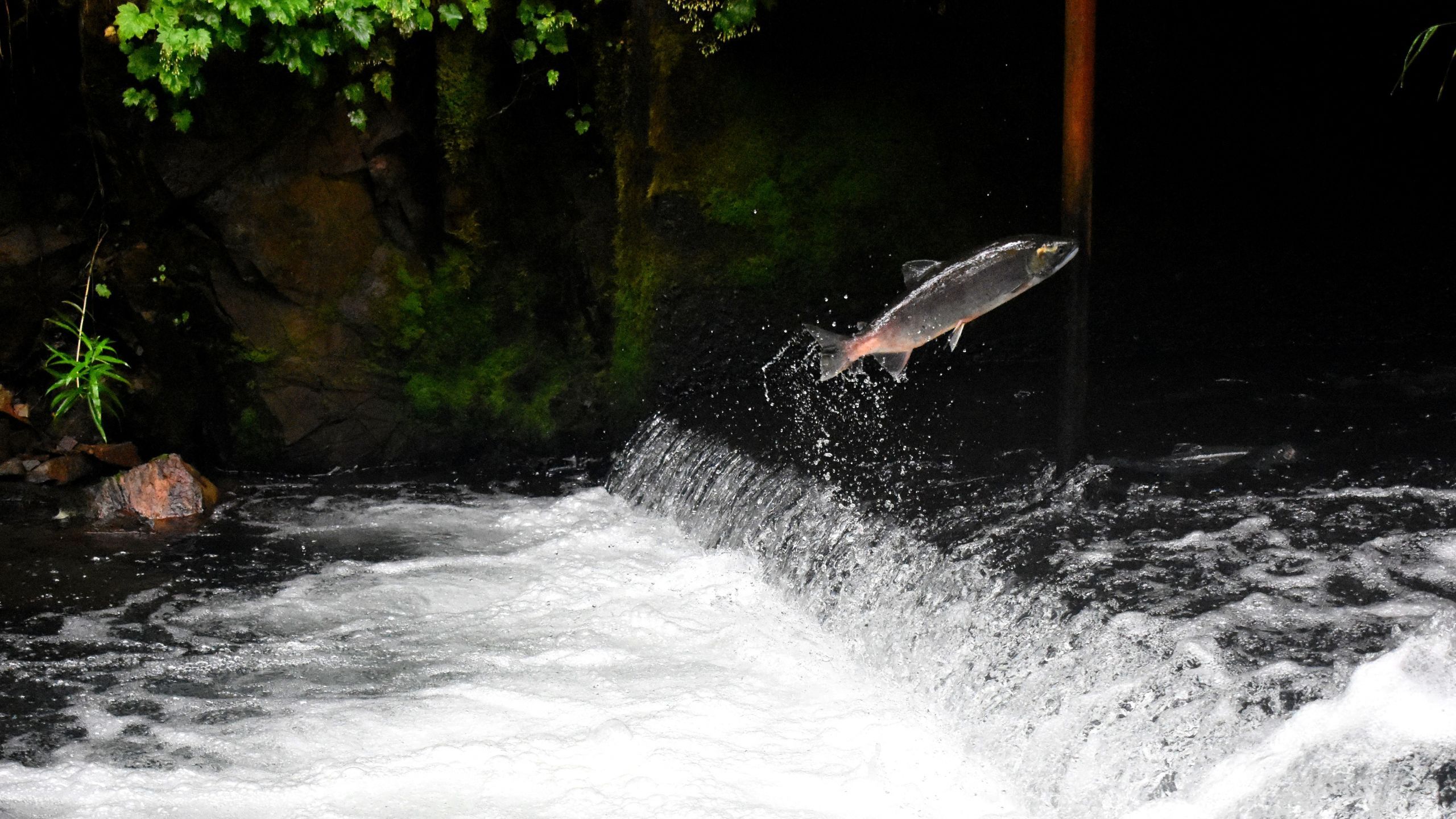 Salmon are anadromous; meaning that they are born in freshwater, migrate to the seas where they spend most of their adult life, and then return to their home range of freshwater to spawn. Certain species, however, stay in their freshwater homes and are known as landlocked salmon.

Salmon of the Pacific Northwest are based primarily in and around the Columbia River Basin before migrating out to the Pacific. Other species of salmon can be found in the western Pacific Ocean in Japan, Taiwan, Korea, and Russia and off both coasts of the Atlantic Ocean. 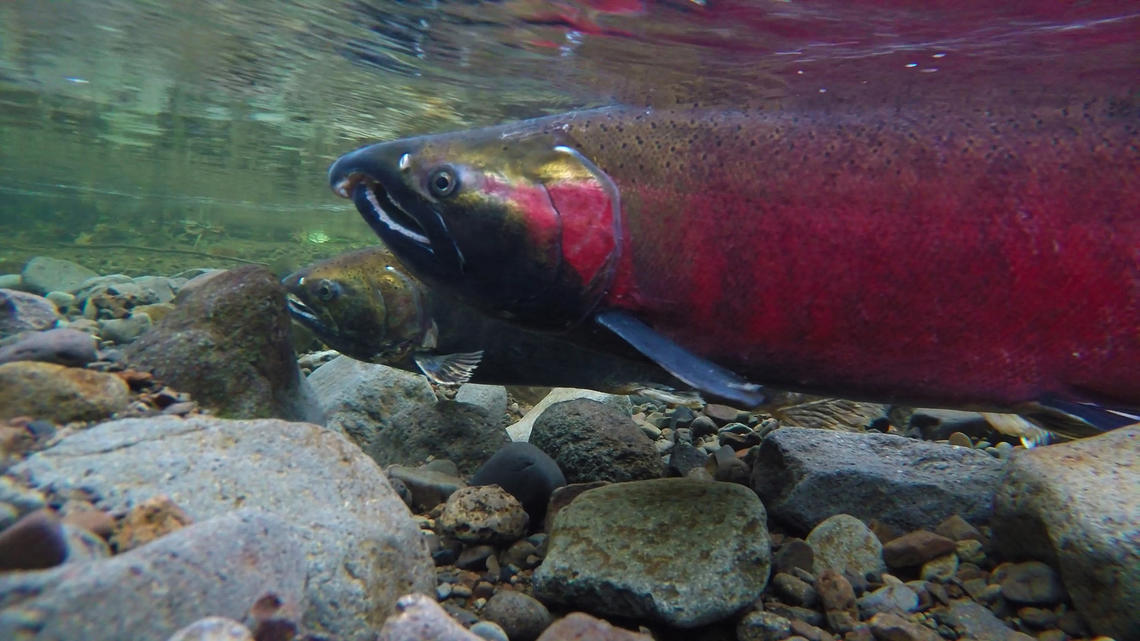 A mature salmon returns to a shallow stream reach to spawn.

After spending one to five years at sea (depending on the species), sexually mature salmon return to freshwater to spawn. Accompanied by a male, the female uses her tail to create a depression in the riverbed, known as a redd. To fertilize the eggs, the male then deposits milt, or sperm. After the female covers the depression with gravel, she moves on to create a new redd. During the spawning period, one female may create up to seven separate redds and lay between 2500 to 7000 eggs.

Salmon live anywhere from 2 to 8 years, depending on the species. Spawning generally marks the end of the salmon’s lifecycle, with most species dying within days or weeks of reproducing.

Man-made dams and reservoirs threaten salmon numbers in the wild by blocking their paths, creating obstacles for young salmon heading for the ocean and adult salmon returning to their spawning grounds. Overfishing, habitat loss, and a number of changing environmental conditions also continue to affect many salmon populations. For instance, rising river temperatures have been connected to an increase in marine illnesses that adversely affect salmon growth.

Conservation efforts include protecting their stream habitat, helping restore streams that have been damaged, reducing fishing, and helping find ways to increase salmon survival through the dams.