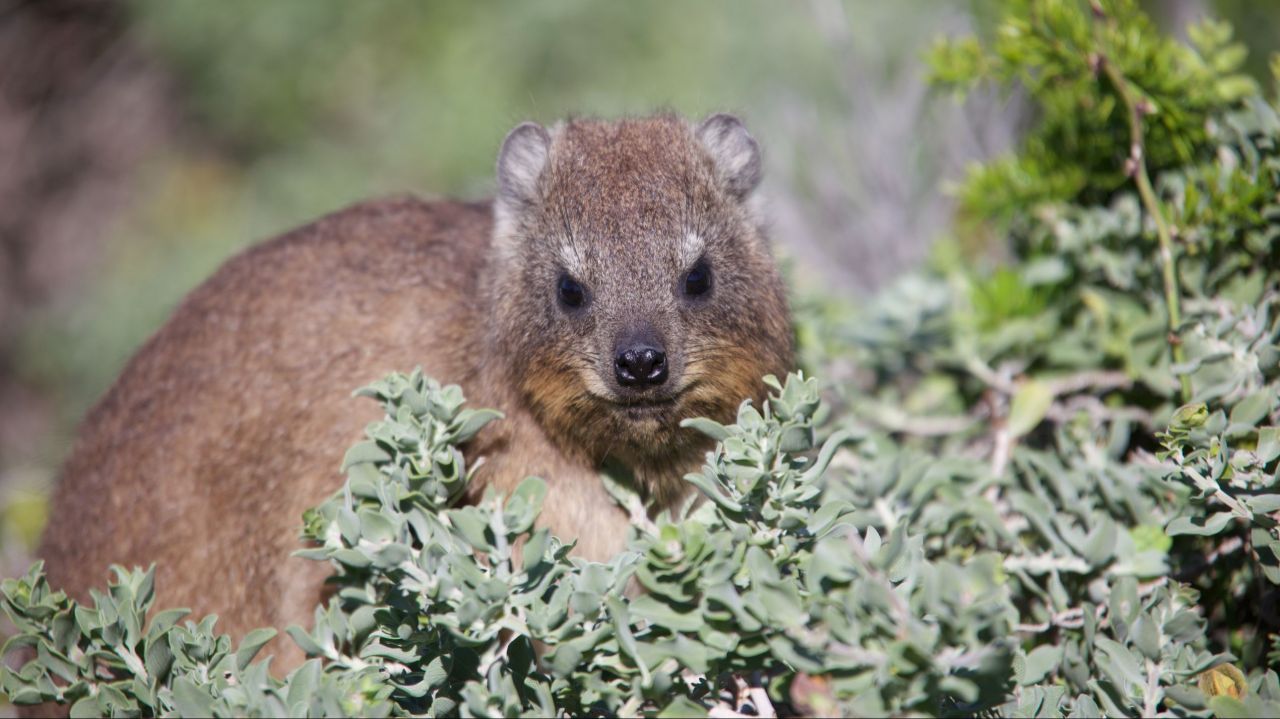 There are three members of the Procaviidae or hyrax family: the rock hyrax, tree hyrax, and bush or yellow-spotted hyrax. 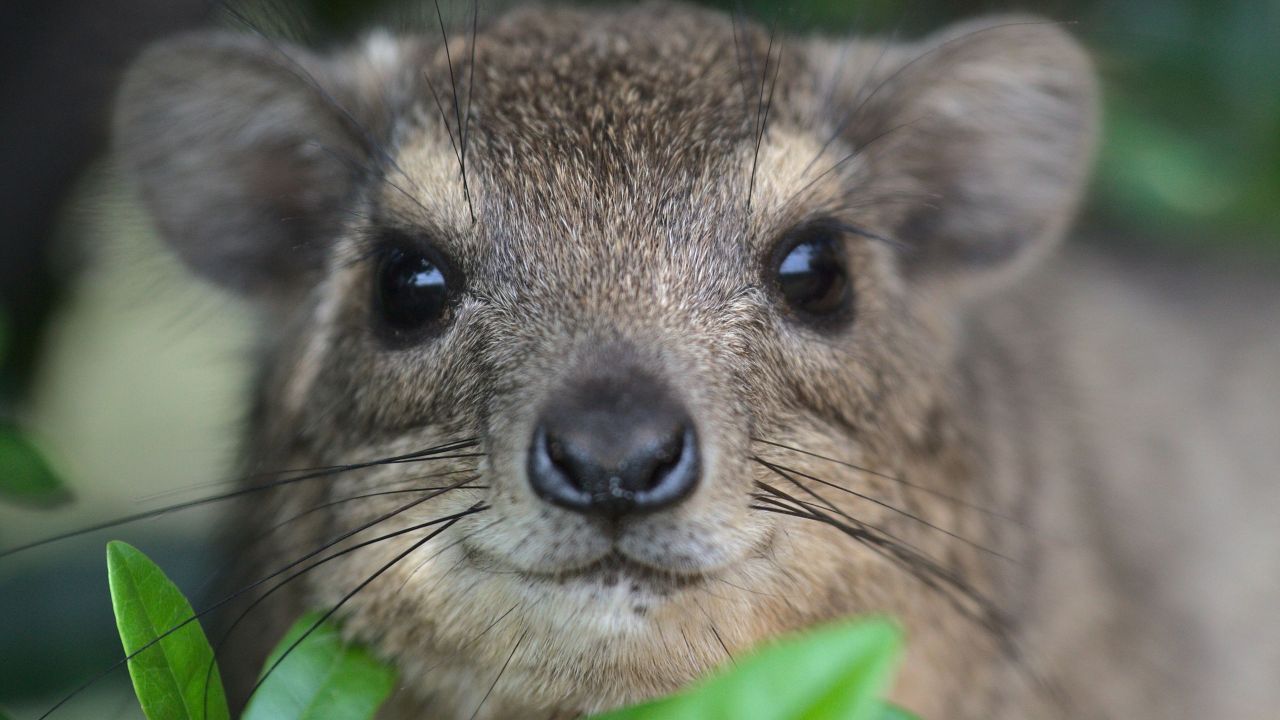 While the rock hyrax looks like a large guinea pig or a rabbit with rounded, short ears and no tail, it is neither. The rock hyrax shares an ancestor with the elephant and has similar teeth, toes, and skull structure to that of an elephant. It has strong molars, which it uses to eat tough vegetation, and two large incisor teeth that grow out to be tiny tusks, just like an elephant.

The rock hyrax’s coat ranges in color from yellowish to grayish-brown, with a lighter underbelly. On their back, they have a dorsal gland, or sweat gland, which is covered with longer, darker hairs. This gland is used to mark rocks or trees to communicate with other hyraxes. They have short legs and stumpy toes with hoof-like nails. They have longer, claw-like nails, called a grooming claw, on the inner toe of the back foot that is used for grooming and scratching. In comparison to the other two hyrax species, the rock hyrax’s head is more rounded and the nose is blunt. 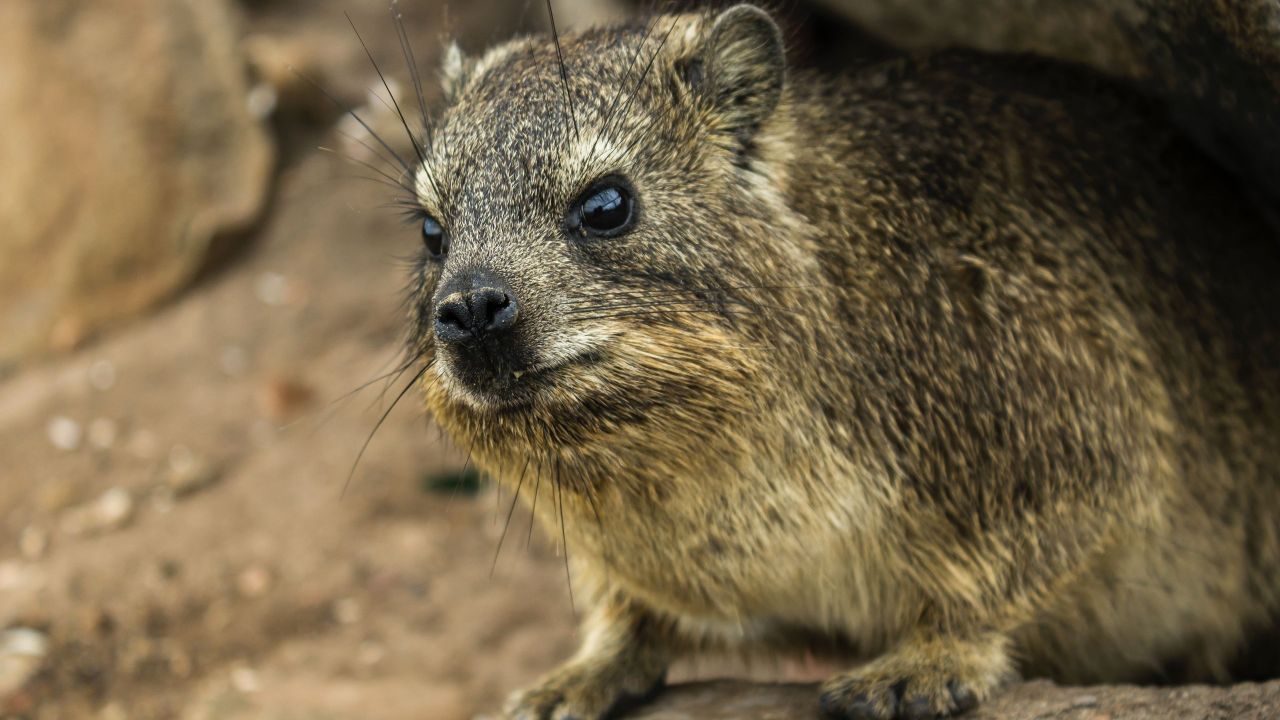 The rock hyrax is diurnal and typically feeds during the daytime. Although they spend only about five percent of their time doing active pursuits like searching for food and spend the rest of their time lounging and doing nothing. Their diet varies depending on the time of year. During the wet season, rock hyraxes eat mostly grass. However, when the grass dries, they switch to fruits and leaves. Their stomachs have three chambers with bacteria, which help them to digest the plants they eat. When they feed, groups form a circle formation with their heads pointing out to keep an eye out for predators.

Their habitat includes the savanna, shrubland, desert, and rocky areas, such as inland cliffs and mountain peaks.

All three hyrax species live throughout most of Africa. However, rock hyraxes are also found along the coast of the Arabian Peninsula up to Lebanon. 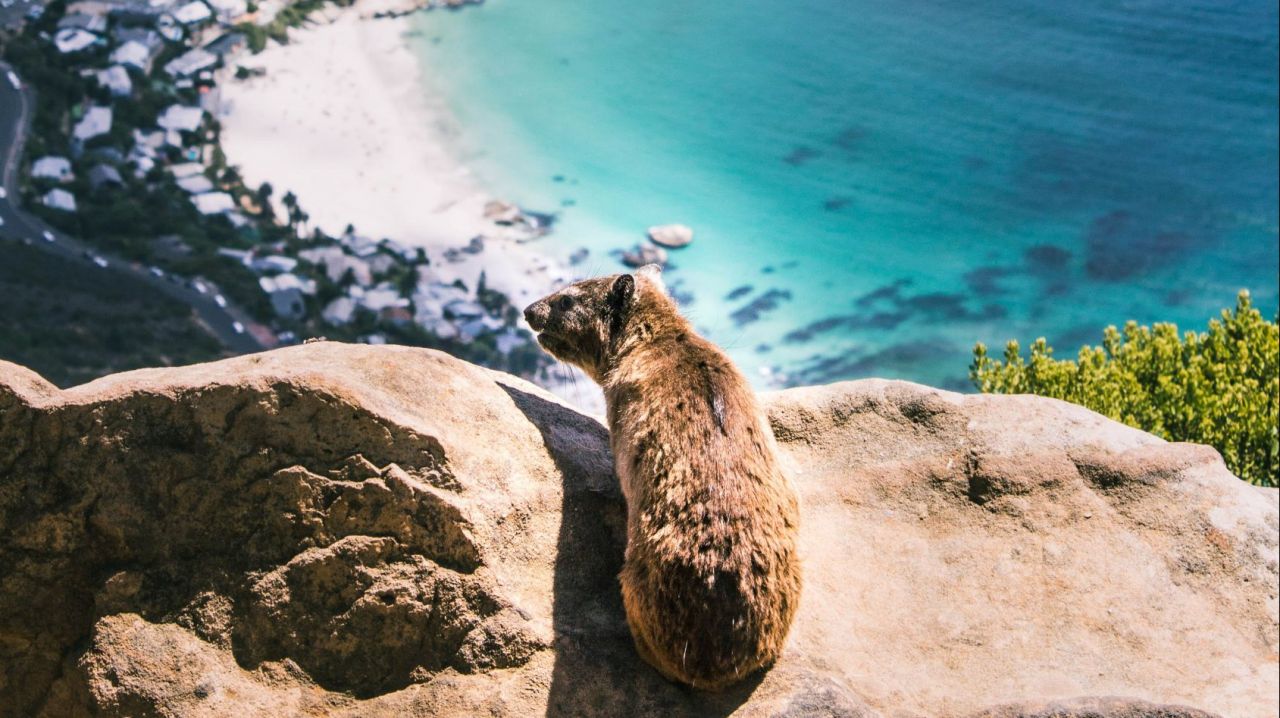 Within their large colonies, there is typically one male for every five to seven females that patrols a certain territory. Hyraxes have extremely long pregnancies, with a gestation period of seven to eight months. A female gives birth to 1 to 4 pups at a time, usually around the same time once each year. Infants are born with their ears and eyes open and within an hour after birth, they can run and jump. They look like miniature adults with the same luxuriant coat.

Nursery groups are formed within the colony for all the babies, where mothers take turns babysitting the pups. While the pups suckle until they are three months old, they begin to eat vegetation within the first three days of birth. Over the next few months of their lives, the young learn from their mother, siblings, and other group members by watching and then repeating the actions they see. While females stay within the same colony for life, males leave the colony at about two years of age to go live on the outskirts of another colony and perhaps take it over one day.

Rock hyraxes are social animals that live in colonies of up to 50 individuals. They share sleeping areas and look for food together. The group begins their day by sunbathing for several hours. Once warmed up, they head out for a short period of feeding. If the weather is cold or rainy, they will not leave their rock shelter. 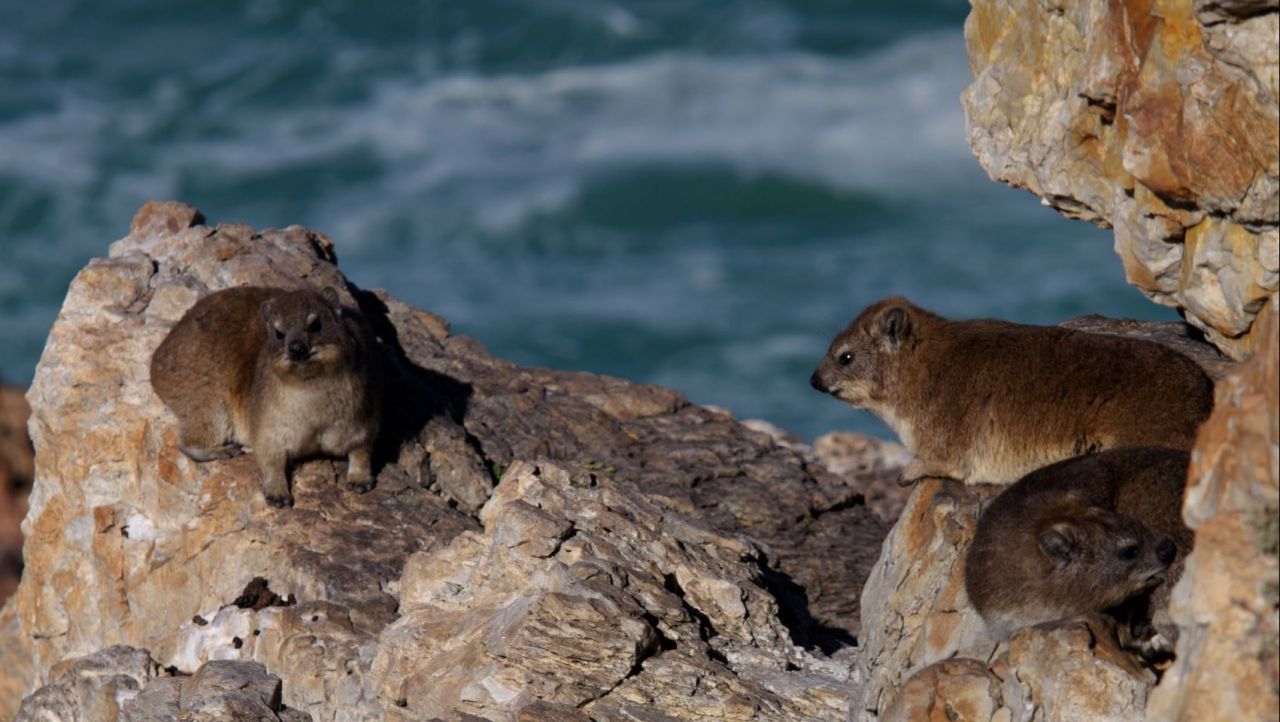 There are no major threats to this species and are even considered a pest in some areas, competing with farmers by eating their plants. They are hunted for their meat and soft fur, but their population remains stable. 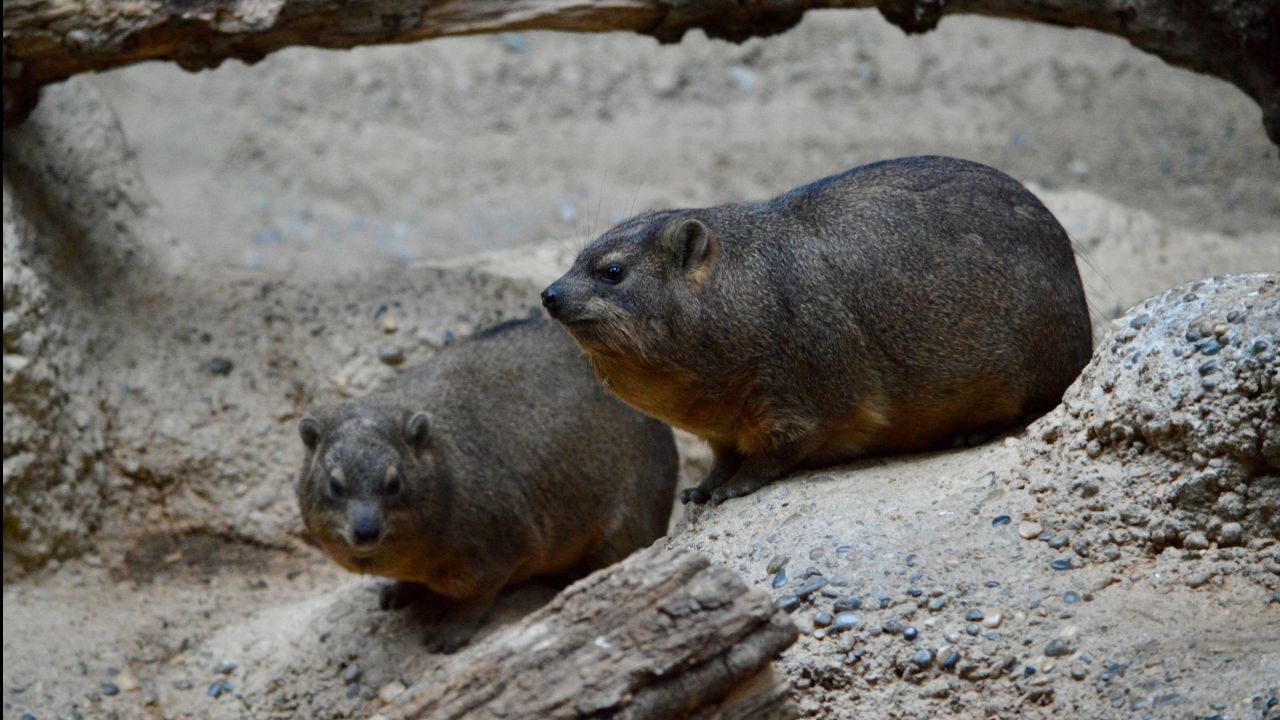 The rock hyrax is listed as “Least Concern” and their population is considered stable, according to the IUCN’s Red List.

While rock hyrax populations are considered stable, numerous conservation groups are working to protect the species. African Wildlife Foundation is among the groups working to conserve the species. Some of their conservation efforts include continuing research, working with local governments and developing conservation tourism.