The Pomsky is a beautiful bundle of mystery and mischief; disguised as a cute little fluffy puppy.

A cross between a Pomeranian and Husky, this marvelous crossbreed has been a near-instant hit; making them very popular and famous dogs.

Pomskies are charming dogs, often having their personality described as sunshine, they are a great match for active singles, couples, or families with older children.

But what do you need to know about the so-called “Perfect Pomsky” before you buy one?

Keep reading our complete pet parent’s guide to finding out…

What Is A Pomsky? 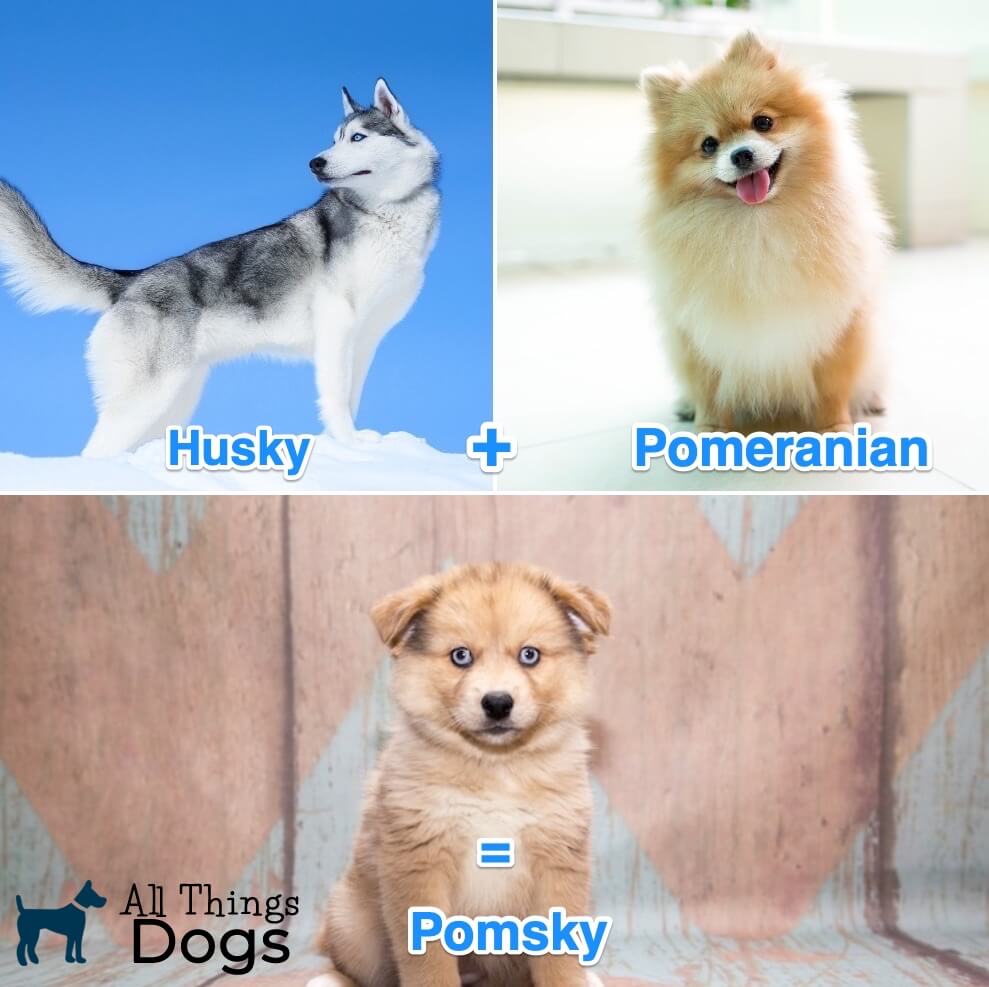 The Pomsky (sometimes called a Pom Husky) is a cross between the Siberian Husky and the Pomeranian. Both dog breeds are members of the Spitz family.

It is likely that the Pomsky came into existence around 10 to 20 years ago, along with the designer breeding craze of the 1990s which produced many famous mixes such as the:

This dog is mainly a companion dog, and being relatively fit, enjoys many canine sports, such as agility or flyball.

As they are crossbreed dogs, they are not recognized by the American Kennel Club, however, they do have their own breed association which is known as the Pomsky Club of America.

Due to the associated health issues with breeding large puppies in small dogs, you will find that a Pomsky has a Husky mother and a Pomeranian father.

Pomsky puppies are at the forefront of designers breeding and consequently they are very expensive.

The average puppy sells for between $2,500 and $5,000 USD. This can increase if either of the parents is show dogs.

Prices are also higher due to the fact this breed is often produced via artificial insemination because of the size differences between the stud dog and dam.

The Pomsky Club of America has a list of approved breeders who meet their code of breeding ethics. If you are looking for a responsible breeder, this may be a good place to start.

If you would prefer to adopt, unfortunately, there is no dedicated group to rescue Pomskies. However, given their popularity, there is potential you may be able to find one in your local shelter.

The Pomsky is often noted for their vocal behavior.

Pomeranians are known to be quite noisy dogs, which combined with the Husky howl, makes for a dog who likes a good chat.

Despite their smaller size, this can be quite a loud bark, and as a result, it may be something to consider if you have neighbors in close proximity.

Good socialization is essential for a well-rounded Pomsky.

If they have little to no experience when young, they may become skittish around new things.

This breed has been known to bite to get out of situations in which they feel uncomfortable. Socializing dogs while they are young will be beneficial to their health and wellbeing.

You may also wish to consider socialization classes.

Pomskies are known to have a high prey drive and may chase smaller animals, including other pets within the home (cats, rabbits, hamsters, and guinea pigs) and animals outside of the home (cats, squirrels, and occasionally even smaller dogs).

On the whole, a Pomsky will do very well with families.

However, it is important to remember that not all Pomskies like younger children, and not all children know how to carefully play with dogs.

All play should always be supervised, and where possible, children should be guided to play correctly with their canine companions.

Known for getting on perfectly well with older family members, this dog breed tends to pick one family member to be their favorite.

They are sometimes likened to a shadow, always wanting to be at that person’s side.

This can make separation anxiety something of an issue with this dog, and consequently, this may be something to consider if you feel you cannot return their devotion.

The Pomsky is known to be a happy, loving dog.

Despite their differences in appearance, there’s one thing they all have in common; they all are the most charming dog you’ll ever meet.

These dogs are known to be very funny and mischievous dogs and are often developing a sense of humor!

This sense of humor often gets them into trouble with their owners, as it can lead to a stubborn streak.

The size of your Pomsky is where things can begin to get a little confusing!

Depending on the amount of Husky and Pomeranian in the cross, you can get different-sized Pomskies.

First-generation Husky x Pomeranian is anyone’s guess, they can be anywhere in size between their two parent’s weight:

The same principle applies to their height too.

Dogs that have more Pomeranian in their blood will be shorter and those who are huskier will be taller.

On average, a Pomsky adult tends to be between 10 and 15 inches tall. 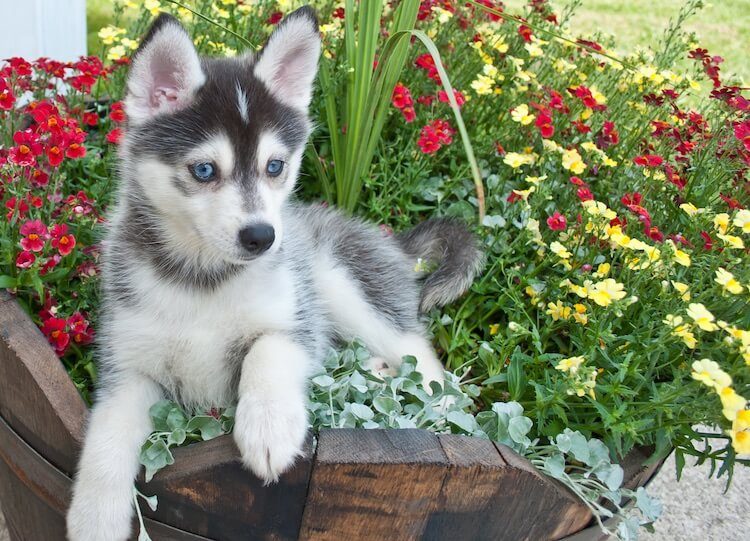 As with size, the appearance of the Pomsky can vary massively!

You could get a dog that is more like a Husky, more like a Pomeranian, or you may get a perfect hybrid.

The best way to get an idea of what a Pomsky puppy will look like is to look at the parents.

Typically, a Pomsky is a small cloud, cute and fluffy dog!

They tend to have the Husky coat, coloring, and eyes, with the Pomeranian face and body structure. Their tail tends to be the most fabulous part, curled over and fluffy.

Pomskies may be many different colors including:

However, the easiest way to try to determine the color of your Pomsky is to look at the color of their parents.

Of course, there are exceptions to the rule, but generally speaking, they tend to be within the same color range as their parents.

The Pomsky is known to have a dense, double coat, like its Husky parent, which is straight and rough to the touch.

They will require brushing daily (because of their frequent shedding).

Owners should use a pin brush to remove dead hair and a slicker brush to detangle.

Not only is this a great way to keep your dogs coat in tip-top condition, but it also acts as a way to reinforce the bond between owner and dog.

After grooming, teeth should be brushed daily as this breed type is prone to dental issues.

Bathing should be done regularly, perhaps once monthly, but more frequently if your dog has rolled in something stinky!

The coat should be clipped every three months to make it easier to maintain.

Their cheeky and occasionally mischievous nature, mixed with their keen intelligence, means they have been known to give owners the run around if they feel like they don’t want to play along. Here are some puppy training tips for your Pomsky.

Pomsky owners should have experience in training to understand the consistency required.

The other thing to note with a Pomsky is their smaller size.

Small Pomskies may struggle in homes with children under five as they may become injured during rough play due to their fragile nature.

It is recommended that you do not feed your Pomsky wet food due to the associated dental issues with wet food. As a general rule of thumb, for Pomskies, it should be avoided.

A good choice for your Pomsky is a high-quality dry food (i.e. kibble) that has been specifically formulated for smaller dog breeds.

This should be easy to pick out at a local pet store due to regulatory labels on pet food, as laid out by the AAFCO.

Always select a feed that has a good quality protein source listed as the primary ingredient (e.g. Salmon, Chicken, or Duck).

Depending on the size of your Pomsky, they will need between 2 and 2½ cups of dry food each day.

This should ideally be split into two smaller meals of between 1 and 1¼ cups depending on how much food your dog needs.

Despite their smaller size, they are relatively active dogs and need regular exercise.

Once fully grown, they need 45 minutes of exercise each day, ideally split into two shorter walks to break up the day.

Many Pomsky owners report that their dogs enjoy supervised swimming in a safe area.

This may be something to bear in mind, if this is something you decide to do regularly with your dog; you should consider a flotation aid.

It may be a good idea to give your Pomsky a fenced area of the garden where they can self-exercise.

Regular play sessions may also be a good idea to get your dog up and moving.

Training and brain games are also a great idea to exercise your dog’s brain (as well as their body).

Building your dog an obstacle course out of old household items may be a good idea to test their bravery as well as intellect, and get them moving!

It is important to note that these exercises are not a replacement for a daily walk, but instead a supplement alongside the walks.

Just because the Pomsky is an adorable ball of fluff, this is not an excuse for poor behavior!

They are known to have something of a mischievous streak, so it is important to use consistency in your training.

If you can feel them testing your patience (which they are regularly known to do), it is better to abandon the attempt and try again another time when you are both ready.

This being said, the Pomsky is a highly intelligent dog, and when they want to, they are incredibly quick learners.

They respond well to positive reinforcement training, such as clicker training.

As a breed, the Pomsky is known to have a few health issues.

The biggest health concern with the Pomsky is Patellar Luxation. This is where the knee joint forms incorrectly, causing the knee joint to extend improperly. This is very common in smaller breeds of dogs, however, it can be treated via pain management, or in more severe cases surgery.

Pomskies are also prone to allergies.

The most common of which is skin allergies or dermatitis. Dermatitis may have a specific trigger, such as a brand of laundry detergent, or it may be a general sensitivity. Dogs that suffer from dermatitis may need to use medicated shampoo when bathing.

As with other small dog breeds, the Pomsky is prone to dental diseases. Periodontal Disease is the most common where a buildup of bacteria sticks to the teeth in a hard layer, causing damage to the teeth. To prevent this, regular tooth brushing should take place.

While out walking, they should either wear a harness or a Halti harness instead of a collar. This is due to the risk of Tracheal Collapse when pressure is applied to the neck from pulling on a collar.

A Pomsky will live for between 13-15 years, factors impacting the longevity of their life include welfare, nutrition (i.e. diet), exercise, and the environment they live in. 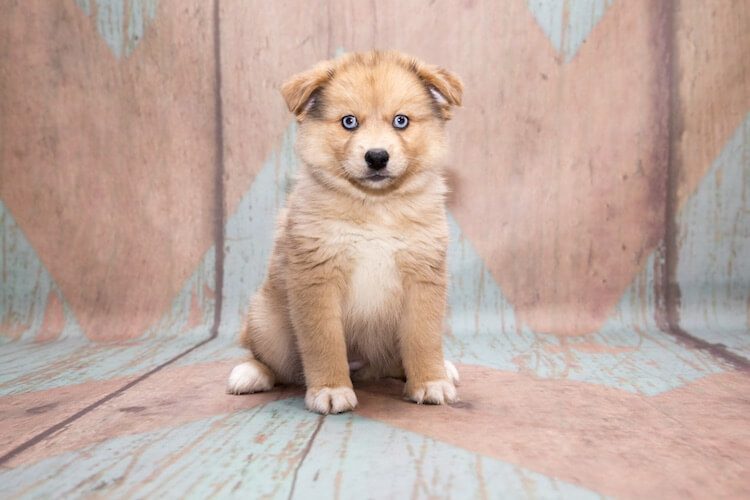 A Pomsky is a great fit for experienced families with older children, couples, or singles. They are not a good fit for families with younger children or those who have never owned dogs before.

Pomskies are known for their loving and happy nature, charming all those they meet. However, they are very vocal dogs, and so if you have neighbors in close proximity this may be something to consider.

Prospective owners also need to be aware of the high physical and mental stimulation requirements of this dog.

After adopting your Pomsky, you will need plenty of consistency when it comes to training as well as socializing.

Do you have a Pomsky at home? Leave us a comment down below giving us your thoughts on this perfect pooch!

Other Husky and Pomeranian Mixes

If you’re interested in learning about other Siberian Husky mixes or Pomeranian mixes, check out the hybrid dog breeds below.

The post Pomsky: Everything You Should Know About This $5,000 Dog | All Things Dogs appeared first on Book Your Book.