Musk oxen are members of the Bovidae family, which includes domestic cattle, sheep, goats, bison, antelopes, and wildebeest. Cattle, bison and buffalos are in the subfamily Boninae, while the musk ox is in the subfamily Caprinae, which also includes ibex, sheep, and goats. Therefore, the musk ox is more closely related to the species in the Caprinae family, such as sheep and goats than it is to cows. 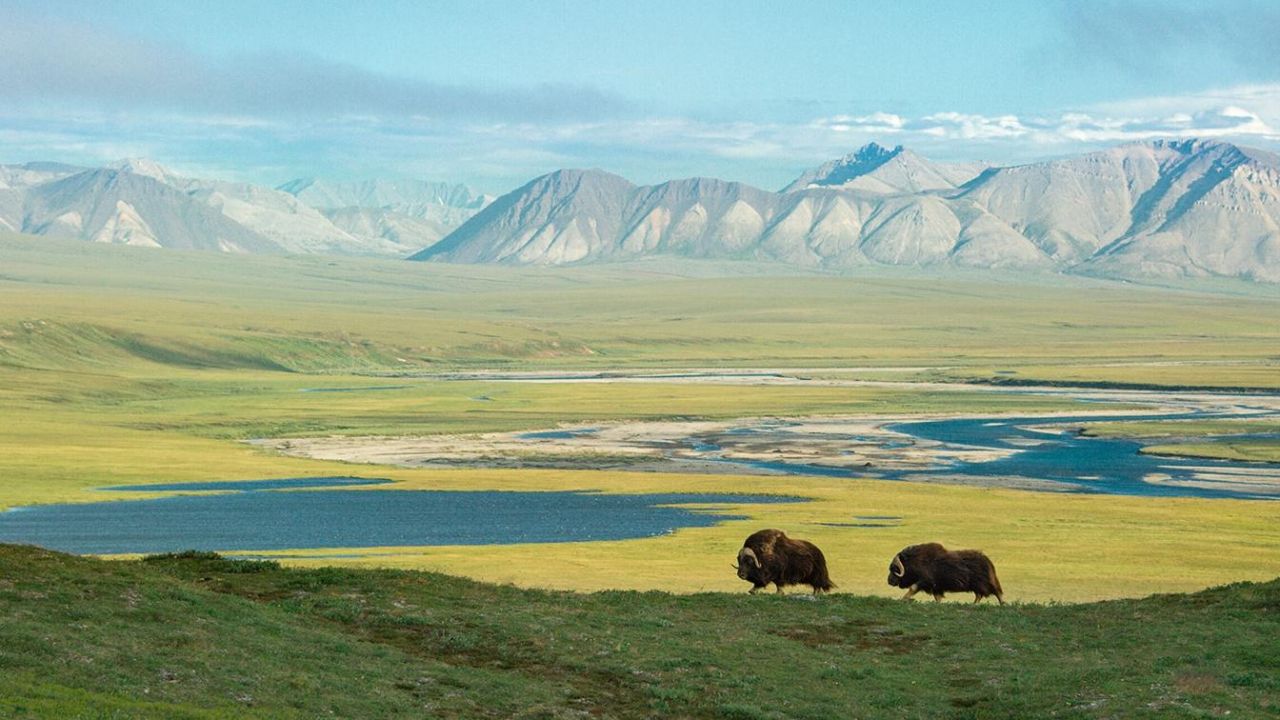 Mature males, called bulls, are about 4 to 5 feet high at the shoulder and weigh 500 to 800 pounds. Females, called cows, are smaller, averaging approximately 4 feet in height and weighing 400 to 500 pounds.

Musk oxen are large, hoofed mammals. They have an extremely thick and shaggy coat. It is two-layered with the outermost layer consisting of guard hairs covering a shorter layer of “qiviut” hairs. Both cows and bulls have long horns, which continue to grow throughout their lifespan.

Musk oxen are herbivorous that feed primarily on grasses, woody plants, and moss.

Musk oxen can be found in the Canadian Arctic, Norway, Alaska and Siberia. 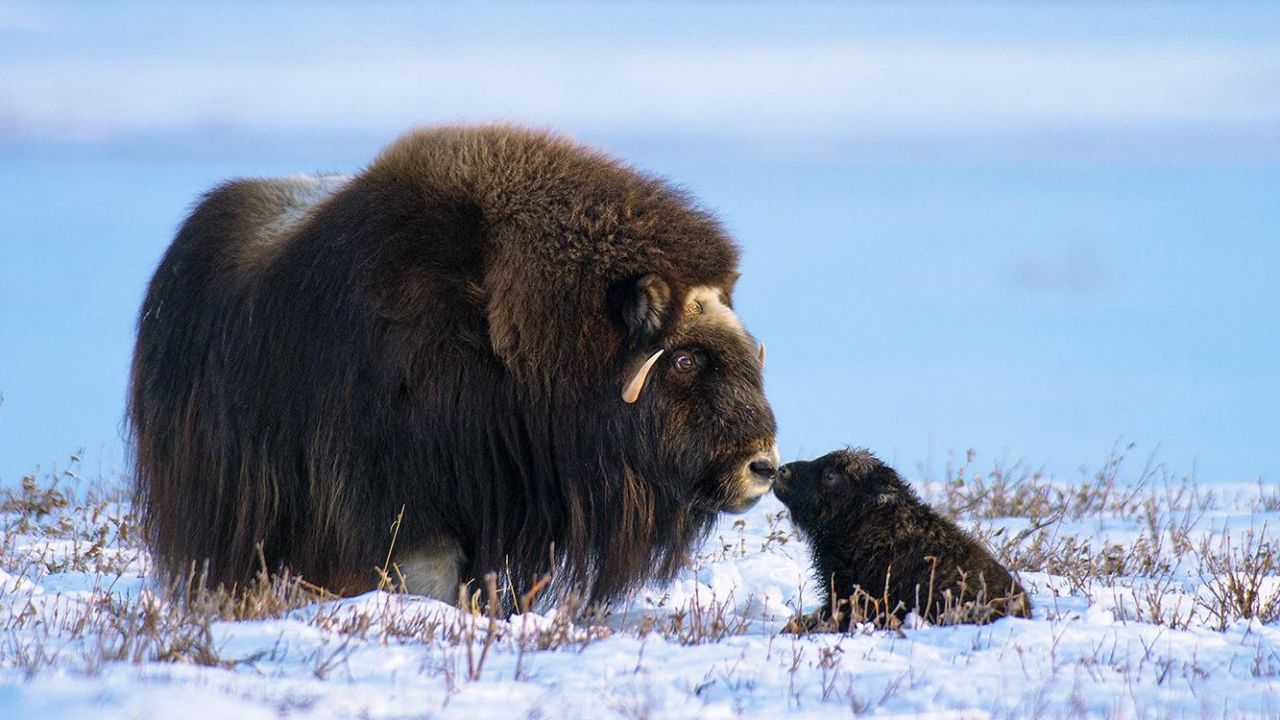 Musk oxen are in part named for the distinctive odor that males produce to attract females during the mating season. Their mating season typically occurs between late August and October. A dominant male will guard a harem of females and compete with opposing males. The dominant male typically mates multiple times with each female during the season.

Following an eight-month gestation period, a female will give birth to a single baby, called a calf. This typically occurs between April and June when the weather is warmer and food is more readily available. After only a few hours of being born, the calf is able to stand and walk on its own. The calf stays with its mother for about two years, where it will be protected by the herd.

Musk oxen live in herds of about two or three dozen individuals, which are sometimes led by a single female. Living in herds offers musk oxen protection from predators like wolves and dogs. use cooperation to deal with predation by wolves or dogs. They have developed an effective defense strategy when they feel threatened called “circle the wagons.” The adults quickly gather into a circle of tightly packed animals with their sharp horns facing outwards and their young hidden away in the middle.

The largest threats to musk oxen are predation by wolves and hunting by humans. In the past, humans killed great numbers of musk oxen for their hides and meat. By 1860, musk oxen were hunted to extinction in Alaska, but they were reintroduced in the 1930s. There are now a few thousand in the state. 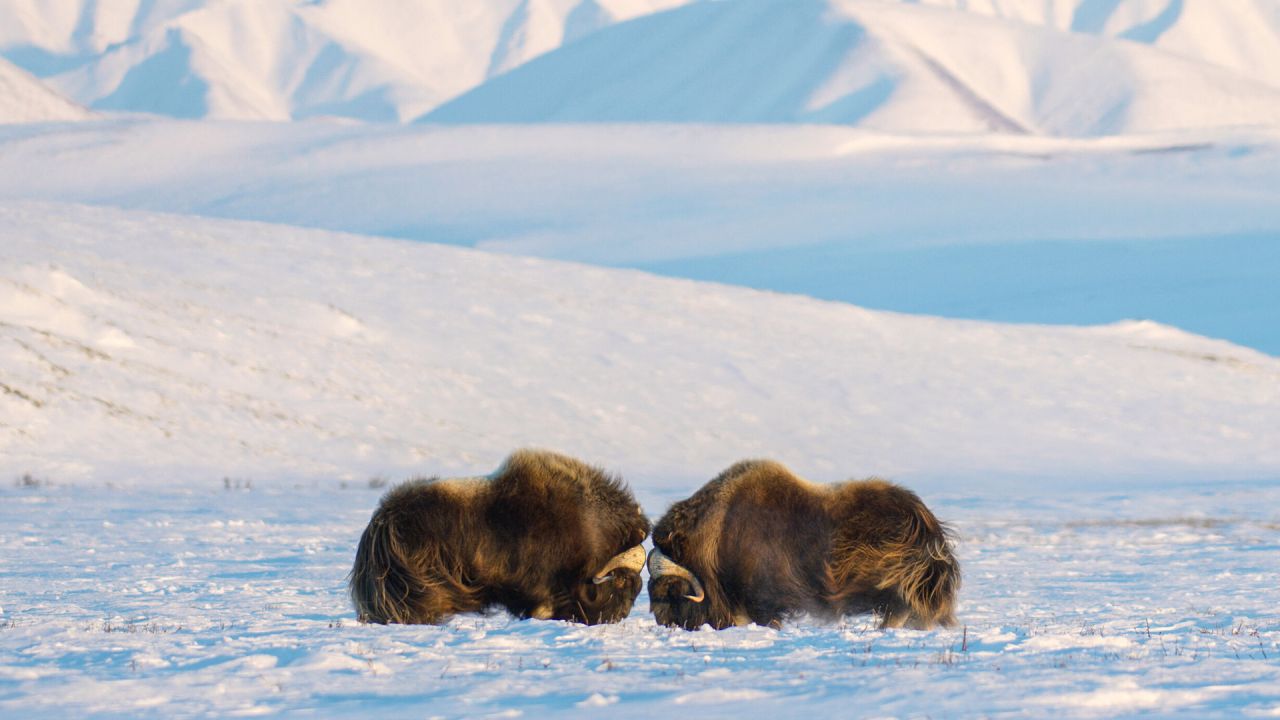 Musk oxen are listed on the IUCN Red List as Least Concern. The population size is estimated to be around 80,000 to 120,000 individuals and is stable.

Musk oxen are currently protected within their range. Legislation protects herds in Alaska, Norway, and Siberia.