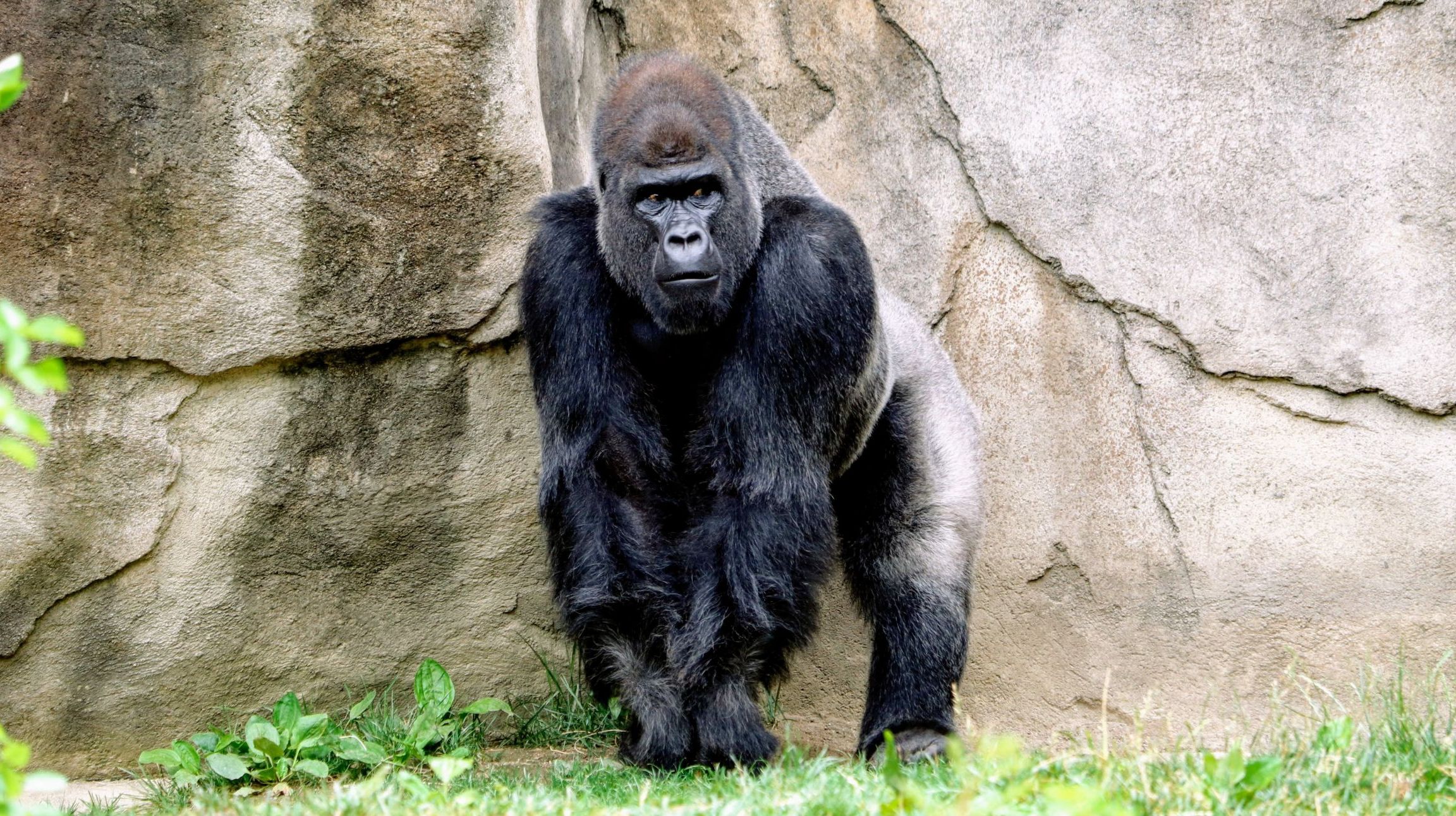 The gorilla is the largest primate. On average, they are 4 to 6 feet tall. Adult males can weigh nearly 500 pounds. Their size varies depending on species and sex. Female adult gorillas tend to be smaller than their male counterparts. Eastern gorillas tend to be larger than the western species, adult male eastern gorillas weigh up to 484 pounds and females weigh up to 215 pounds.

Gorillas are the largest of the great apes. They have stocky physiques with broad chests and shoulders. Their stomachs are typically larger than their chests. Their large stomach size is attributed to their enlarged intestines, which digest the vegetation they consume. They have large, human-like hands, and small eyes set into hairless faces. Gorillas have dark skin and black to brown-grey fur. The eastern gorilla is distinguished from the western gorilla by its darker fur color.

While gorillas are able to stand upright, they prefer to walk using their hands and their legs. Their arms are much longer than their legs, and gorillas can use the backs of their fingers like extra feet when they walk, known as the knuckle walk. 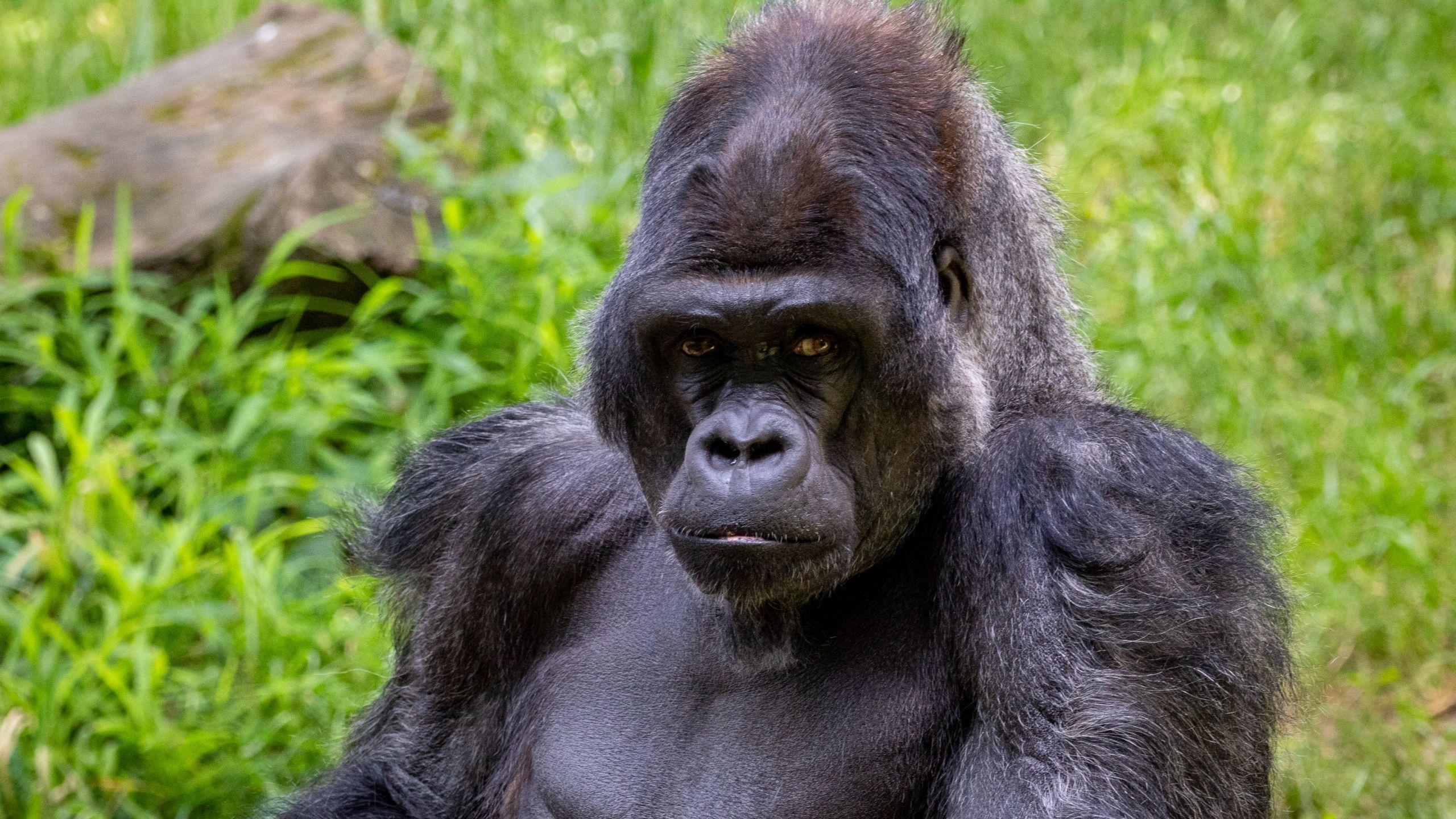 Gorillas mainly eat plant material. Their diet also includes leaves, stems, fruits, seeds, roots, ants, and termites. An adult male gorilla may consume more than 40 pounds of vegetation per day. Their large stomach can hold all the bulky food they eat and their strong jaws help them to chew tough tough stems. Because they consume a large amount of vegetation, which is compromised of almost half water as well as morning dew, gorillas rarely need to drink water.

Gorillas can be found in tropical and subtropical forest habitats. They cover a wide range of elevations, with mountain gorillas found high in the mountains and lowland gorillas found at sea level.

Female gorillas reach sexual maturity at around six to eight years old and may start to breed several years later. When she is ready to breed, she will leave the safety of her own troop and find another troop or a lone silverback to live with. Female gorillas typically give birth to one young at a time. Newborn gorillas, called infants, are smaller than human infants at birth. Gorilla infants only weigh 3 to 4 pounds, which is about half the size of a human infant! But they grow at a much faster rate than humans and reach maturity around 12 years old.

Newborns and their mothers have a very close relationship. They typically stay in physical contact with their moms for 5 to 6 months. They start to crawl at around two months old and learn to cling to their mothers’ backs before learning to walk at around nine months. Newborns quickly become experts at grasping their mothers’ fur and can eat and sleep on piggyback. Gorillas have been known to nurse for up to three years, which is around the same time the mother is ready to have another young. A young gorilla stays close to its mom, sharing her nest, until it is four to six years old.

Gorillas live in groups called troops, which range in size from 5 to 30 gorillas. The troop is compromised of 1 to 4 adult males or “silverbacks”, some juvenile males, several adult females and their young. A strong, experienced male leads the troops, making all the decisions for the troop. He is responsible for the safety and well-being of the members of his troop.

Nearly every day, the silverback will lead his troop to a new location where the food is plentiful. After a morning of eating, each adult gorilla gathers leaves, twigs, and branches to make a day nest for resting while the youngsters play. After their nap, the gorillas eat again until bedtime, when they make yet another nest, either on the ground or in a tree. They never use the same nest twice. 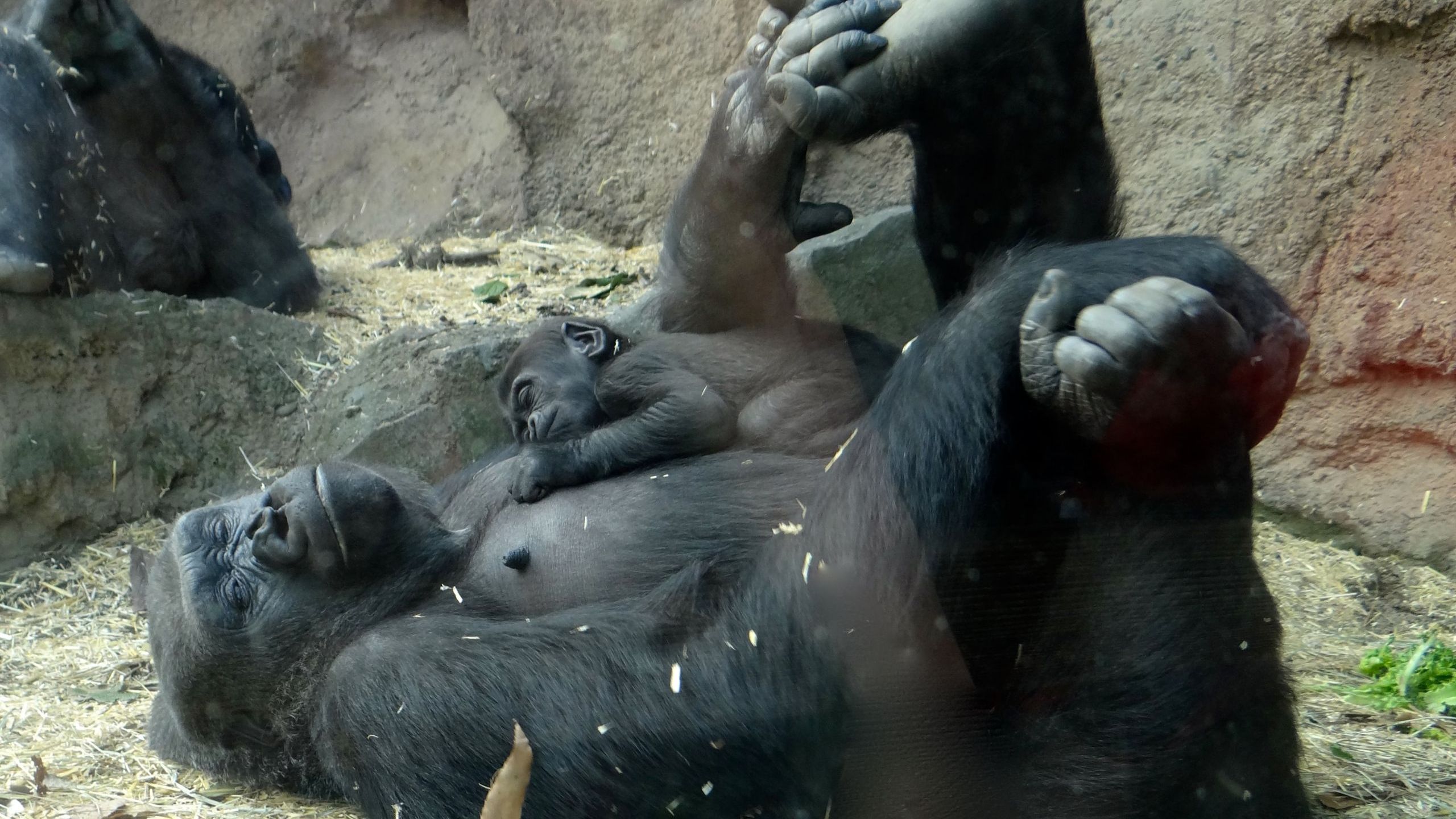 Gorillas have no natural enemies or predators. The biggest threat to the species is humans. Gorillas are hunted by humans for their food called bushmeat. Logging and mining companies have destroyed gorilla habitats. Local armed conflicts in the eastern Democratic Republic of Congo has caused refugees to pour into previous gorilla habitat. Diseases like the Ebola virus have recently decimated gorilla populations. The illegal pet trade is also a threat to the species. Behind each infant gorilla caught by poachers, several family members are often killed.

Conservation efforts by organizations, such as the World Wildlife Fund (WWF) and the San Diego Zoo Wildlife Alliance, and governments are making a difference for gorillas. New protected areas are being designated for some gorilla populations. There are laws in eight African countries governing gorilla capture and hunting. Conservation groups are working to promote public awareness and education on gorillas in local communities.