A Sheprador is a designer dog that’s a mix between a German Shepherd and a Labrador Retriever. It’s a large dog with a lot of energy, as you might expect from both parent breeds. You may also hear this hybrid called a Labrashepherd, although the Sheprador name is more common.

A German Shepherd Lab Mix can weigh from 50 – 85 pounds and can grow up to 27 inches in height. They sport a medium length coat between that of a Lab and a German Shepherd. The coloring varies, and they can be tan, black, chocolate, or a range of colors.

If this is your first time owning a dog, a German Shepherd Lab Mix may not be the best choice. They are large and require a lot of training. However, if you have the time and skills to train them, they can be fiercely loyal dogs who will be protective of you.

Many people want a Sheprador as their family pet because they do not bark too much apart from alerting you of strangers. Make sure you take them for plenty of walks and entertain them, as they can quickly become bored, which can lead to them destroying your furniture and possessions.

The size a Sheprador grows to can vary a lot depending on its genetic make-up. Generally, they grow to around 20 – 27 inches tall at the shoulder and weigh up to 75 – 85 pounds. There is a lot of variance, so be aware that if you buy a puppy, you can never be confident how large it will grow.

The fur of a German Shepherd Lab Mix is a medium-length waterproof double coat that’s quite dense, so it sheds a lot. Allergy sufferers may want to choose a different dog breed for this reason. The fur is straight and easy to brush, and daily brushing is recommended to help maintain the coat.

Most German Shepherd Lab Mixes will have either brown or blue eyes, depending on their parents’ genetics. However, pretty much all will have a black nose. Rather than the characteristically pointy ears of a German Shepherd, Shepradors more often have the floppy ears of a Labrador. However, this will depend on the individual breed of the dog.

German Shepradors have been around since the 1980s, when hybrid and designer dogs first reached popularity. This specific mixed breed is more recent, but the parent breeds are not. The Labrador dates back to the 19th Century, while the German Shepherd dates back to records in 1899.

To understand this type of dog, you must first understand the two parent breeds. The German Shepherd is known for intelligence and strength, leading to its use in police roles. The Labrador originates in Canada, where its strength was used by fishermen to assist with pulling ropes and nets.

German Shepherds are good with kids and are excellent dogs for families, although not ideal for novice owners due to their size and high activity requirements.

The classic family pet, Labrador Retrievers weigh around 55 – 70 pounds and stand at 21 – 23 inches tall. While Labradors are often thought of as cream colored, they can also be brown or black; the colors Shepradors are more likely to inherit. They also have a short to medium-length coat that’s extremely dense.

Labrador Retrievers are known for being good around both kids and other dogs as well as strangers. They are an excellent choice for a family and are slightly better for novice pet owners due to their relaxed temperament. 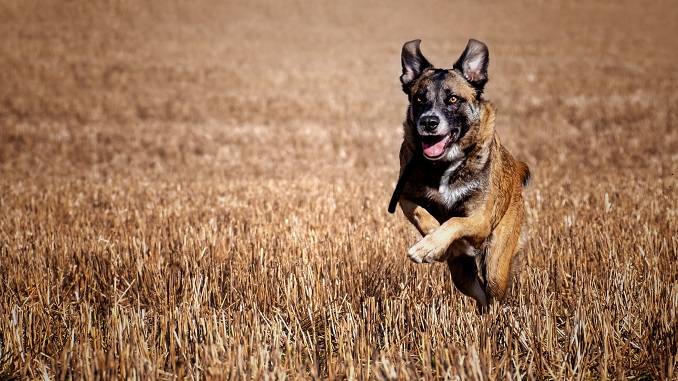 Shepradors are loyal dogs who love being around humans. While they don’t enjoy being alone, they’re also not prone to excessive barking or howling should you be away for an afternoon. They need a big backyard where they can run around, so they are not suitable for those living in an apartment.

Lab German Shepherd Mixes are incredibly affectionate and friendly and cope well with being around small children. They are also good with other dogs, so you can easily take them out to the dog park without much trouble.

Shepradors are not recommended for inexperienced dog owners. This mixed breed has high activity needs, and requires at least an hour of exercise per day. Because German Shepherd Lab Mixes need to be taken on regular walks, getting one is a considerable commitment for new dog owners. 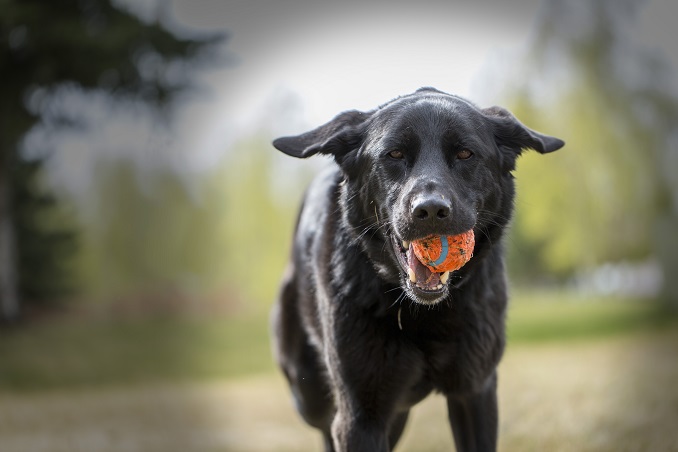 Shepradors have a tremendous amount of fur that requires daily brushing. While they are not difficult to brush, this can be a lengthy task. They also eat a lot and need a lot of exercise, so they can be both costly and time-consuming to care for.

German Shepradors must be fed a diet suitable for such a large dog with high energy needs with plenty of high-quality protein and vegetables. A regular feeding schedule is required, as they easily gain weight if overfed.

Just like all dogs, their food needs will change as they leave puppyhood and again as they advance in age. While the amount will vary according to the needs of the individual dogs, you can expect a fully-grown German Sheprador to eat around 3 cups of kibble each day.

Shepradors have an extremely thick double coat that requires daily brushing. They will shed a lot, so you may even need a vacuum cleaner that specializes in sucking up animal fur. Wash their fur every few months with dog shampoo to keep their coat in optimal condition.

German Shepradors are an energetic breed that needs a lot of exercise to be happy and well-behaved. They require around 60 minutes of physical activity per day. If you don’t have time to take it on long walks, you should at least have a large backyard where it can run around.

German Shepherd Lab Mixes are not a good choice if you live in an apartment. However, if you only have a small backyard, it should be fine as long as you take your Sheprador on daily walks.

The German Sheprador can be mouthy, so make sure that you have plenty of toys around for them to chew on. This will prevent them from picking up your shoes or destroying the furniture. They may also need to be put outside or in a kennel when you leave the house so that they can’t chew through your possessions.

Plenty of playtime will stimulate the mental needs of a German Shepherd Lab Mix, as they are alert and intelligent dogs who will be happier with some mental stimulation.

Shepradors need to burn a lot of energy, or they are prone to becoming obese. They have a large appetite, so if you don’t exercise them enough, they can gain a lot of weight.

These dogs are also prone to having skin allergies, such as sensitivity to dust, pollen, chemicals, and mites. If you notice them scratching, you should get this checked out.

Like many other large breeds, a German Shepherd Lab Mix may suffer from hip dysplasia. Ultimately, this can result in arthritis for the dog later on. It can often be prevented with the proper diet and a good amount of exercise. 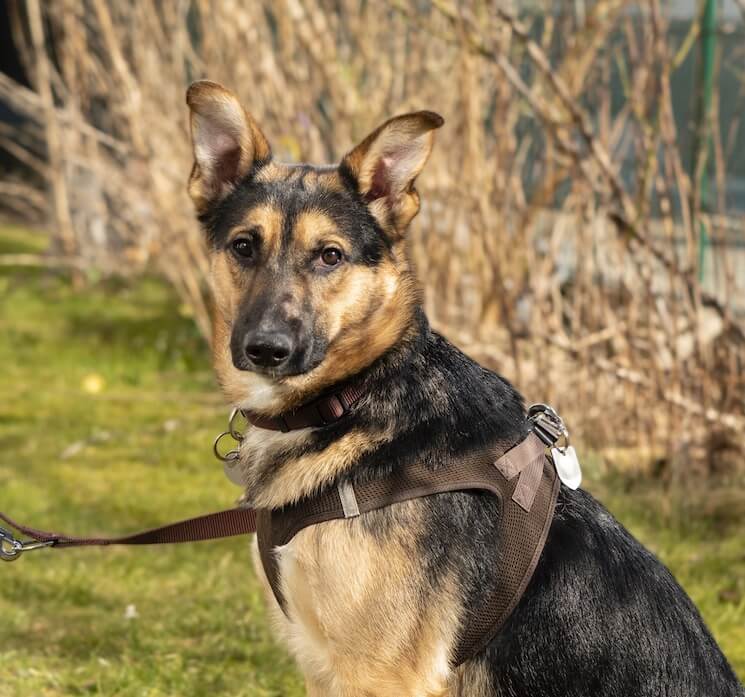 Shepradors are known as reasonably easy dogs to train, as they are usually eager to please their owners. Most owners use the simple command and reward strategy to show their authority while offering some positive reinforcement.

German Shepherd Lab Mixes quickly learn that they get a reward for reacting and being responsive to the owner. They respond well to boundary-setting, so if you say ‘no’ and follow through with it, they should learn quickly. These puppies will respond to consistency, so make sure that if you say no, do not go back on your word.

If you find that your German Sheprador is challenging to train, it’s possible that they are not getting enough exercise, so it’s a simple case of too much energy. 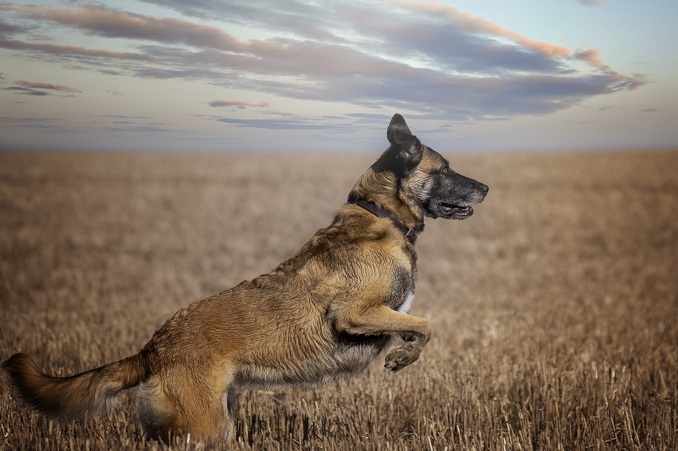 The cost of owning a German Shepherd Lab Mix is relatively expensive. While they are not the most expensive dog to buy, they eat a lot and have a lot of ongoing needs you will need to pay for.

How Much is a German Shepherd Lab Mix?

A German Shepherd Lab Mix costs around $500 – $800. The actual price will depend on its lineage. As with all mixed breeds, how prized the parents are will contribute to the cost.

If you go to a shelter and find a Sheprador to rescue, this will be significantly cheaper than buying a puppy. Or you may be able to find an older dog to purchase from someone who can no longer take care of it. Again, you can expect to pay far less.

How Much Does It Cost to Raise a German Shepherd Mix?

The main expense of raising a German Shepherd Mix is in the food costs. As they have a large appetite, they will eat about 3 cups of kibble each day, costing you roughly $50 – $70 a month.

Shepradors do require regular brushing and bathing. However, you can do this yourself, so it doesn’t have to cost a lot. Be aware that these dogs can quickly develop dental issues if you don’t maintain their dental health. This could be expensive if they do develop problems.

Should You Get a German Shepherd Lab Mix? 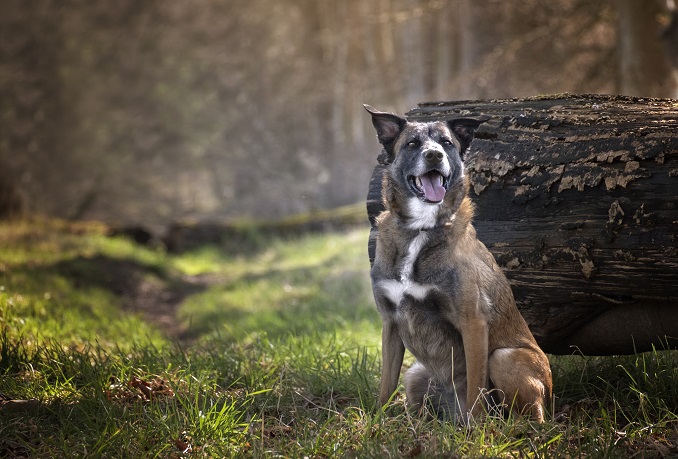 German Shepherd Lab Mixes are lively, loyal, and friendly dogs. They will be your best friend, protecting and loving you every day. However, if you are not ready to exercise them as much as they need or live in a small place, they may not be for you.

Shepradors are suitable for families, as they have a nurturing disposition and love being around children. If you have a large backyard or are prepared to take them on plenty of long walks, they could be very happy with you. Make sure to set proper boundaries, and they should respond to your every command.

Shepradors are NOT Suitable for:

Shepradors shouldn’t be purchased by people living in apartments or those with small backyards who will not frequently walk the dog. These people should consider getting a smaller breed with fewer exercise needs. A German Shepherd Lab Mix simply will not be happy if not getting enough exercise and may become destructive as a result.

Whether or not a Sheprador is right for you will highly depend on your living situation and how active you are willing to be. If you are ready to take care of a large, active dog, they could be your ideal companion.

Other Lab and German Shepherd Mixes

If you’re interested in learning about other German Shepherd mixes or Lab mixes, check out the hybrid dog breeds below.