The Chow Shepherd is a designer dog. It’s bred from two pedigrees to create a new breed. Designer dogs can be healthier and more sturdy than their parent breeds. However, improper breeding can also have the opposite effect, magnifying any pre-existing health issues. So, it’s important to do plenty of research and background checks before buying or adopting a Chow Shepherd.

A German Shepherd Chow mix is a medium to large dog, standing at around 18-26 inches, and weighing approximately 40-95 lbs. These dogs are friendly and sociable when properly trained, and can make efficient guard dogs. German Shepherd Chows feel most comfortable in families who have plenty of time and energy to devote to their pets.

The Chow Shepherd is a large dog, with a high-maintenance coat of fur. Its coloring is similar to its parent breeds, usually in shades of black, brown, and tan. Depending on the individual dog, a Chow Shepherd may resemble either a Chow Chow or a German Shepherd.

Usually, Chow Shepherds have a long muzzle, tufted ears, and the almond eyes of a German Shepherd. With proper grooming, the Chow Shepherd is a beautiful dog.

Because both of the parent breeds are sizable dogs, Chow Shepherds are medium to large by the time they reach adulthood. Since the Chow Shepherd is a relatively new breed, its size and weight can vary quite a lot. They can grow to 18-26 inches in height, and weigh anywhere from 40-95 lbs.

The Chow Shepherd, like many other dog breeds, can be prone to obesity. Too much food or too many snacks will lead to your Chow Shepherd putting on too much weight, which causes other health conditions.

Both German Shepherds and Chow Chows have thick, dense coats, and the Chow Shepherd has inherited this trait. The Chow Shepherd is a high-shedding dog, and also sheds seasonally. As a result, it will need regular brushing and grooming.

Since coat length in German Shepherds varies between long and short, soft and rough, a Chow Shepherd can also be varied in coat length and quality. Long-haired Chow Shepherds will need more intensive grooming, as they’re prone to tangles and matting. They’re also more prone to getting dirt and debris stuck in their fur. 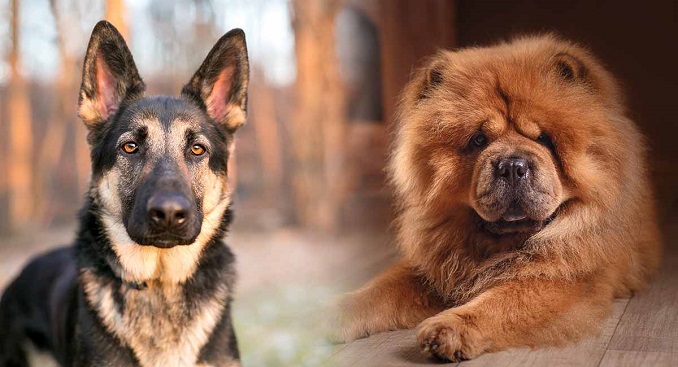 While it’s possible that Chow Shepherds existed before the early 2000s, the breed first emerged publicly around 10-20 years ago. Combining the two well-known and attractive parent breeds of German Shepherd and Chow Chow results in the intelligent, loyal, and beautiful Shepherd Chow.

While Chow Shepherds are growing in popularity, they’re still a rare dog breed.

German Shepherds are commonly used today as police or military dogs, due to their high prey drive and protective nature. However, they’re just as comfortable as part of a family, as a companion pet. They can be friendly and affectionate if well socialized, but German Shepherds do tend to be wary of strangers.

Chow Chows are an extremely old breed of dog, possibly having originated in China or Mongolia around 2000 years ago. Due to the age of the breed, it’s difficult to pinpoint exactly when and where the Chow Chow came around.

Chow Chows are still popular dogs today and are known for their intelligence. They are a more reserved breed of dog, needing proper socialization and training. Due to their stubborn streak, Chow Chows can prove a challenging breed for a new dog owner. 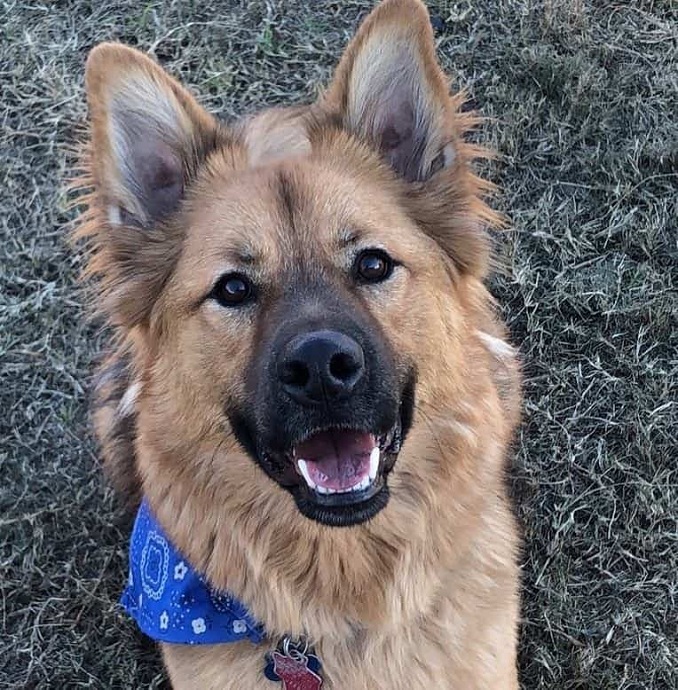 A Chow Shepherd can be a loving and affectionate family dog. Chow Shepherds are protective of their families and wary of strangers. Like the German Shepherd, Chow Shepherds make good guard dogs and are less aloof than a traditional Chow Chow.

However, Chow Shepherds can be stubborn. They are very intelligent, and these two qualities can make training difficult. They will sense uncertainty and inconsistency in an inexperienced trainer, and act out accordingly. This means that Chow Shepherds aren’t ideal dogs for new or inexperienced dog owners.

Chow Shepherds can be socialized to get along with other pets and children, but this takes work. If you have small children or other pets in your family, a Chow Shepherd may not be the best addition to your household.

Chow Shepherds also need mental stimulation and physical exercise. They like attention and will misbehave if left on their own for too long. This misbehavior can include chewing and destroying furniture while their owners are out. Chow Shepherds aren’t recommended for households where they’ll be left alone too much, or won’t get the time and attention they need.

Chow Shepherds are moderate to high maintenance dogs. A Chow Shepherd will thrive with an experienced dog owner who has plenty of time to spend on their dog. But don’t be fooled – this hybrid breed is not the easiest to care for.

A Chow Shepherd needs high-energy food formulated for dogs of their size. Depending on the size of your Chow Shepherd, you’ll need kibble aimed at either medium or large-sized dogs. One feeding a day is recommended, possibly two. Since a Chow Shepherd is prone to weight gain, it’s important not to overfeed your dog. Keep treats to a minimum.

Due to their thick, dense coats, Chow Shepherds need regular brushing and grooming. Daily brushing is best, or at least two to three times a week. During shedding season, your Chow Shepherd will need brushing more often. Chow Shepherds aren’t recommended if you suffer from allergies.

Be sure to dry your Chow Shepherd thoroughly after bathing, or take your dog to a professional dog grooming salon.

It’s also worth noting that this thick coat will cause your dog to heat up more quickly in warm weather. It also keeps them cool in cold weather, and Chow Shepherds often enjoy playing in the snow.

Chow Shepherds need plenty of exercises. Ideally, one to two hours’ worth of high-intensity exercise per day will keep your dog healthy and happy. Since Chow Shepherds often can’t be trusted off their lead, take them to an enclosed area to let them run.

Jogging, hiking, and games of fetch and throw are all ideal for keeping a Chow Shepherd energized and fit.

Chow Shepherds also need mental stimulation. Puzzles, games, and attention will keep them happy and occupied. Bored Chow Shepherds may become destructive and depressed. If your lifestyle doesn’t allow you to spend much time with your dog, or if your dog is likely to be left alone all day, a Chow Shepherd isn’t the right breed for you.

Chow Shepherds are prone to several health problems, such as joint dysplasia. This is a common condition, especially among larger dogs. It can occur in the hip, elbow, or other joints, and means that the bone doesn’t fit snugly into the socket. This causes pain, lameness, and arthritis as the dog ages.

Hip and elbow dysplasia are hereditary and don’t always cause visible discomfort in the dog at first.

Bloat is another condition that can affect Chow Shepherds and other large, deep-chested dogs. This is a life-threatening condition in which gas accumulates in the stomach and is unable to escape.

You can reduce your dog’s chances of developing bloat by slowing down their eating, preventing them from drinking too much water immediately after eating, and not allowing them to exercise vigorously after a meal.

Other health concerns include entropion (in which the eyelid rolls inward), and regular concerns like obesity. 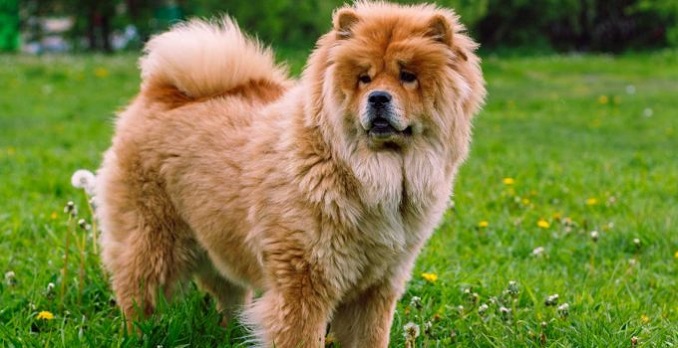 When training a Chow Shepherd puppy, it’s important to start training early. Use positive reinforcement and praise, as these dogs won’t respond to harsh methods. To prevent joint problems in later life, don’t let young puppies run and play on hard surfaces, as their joints don’t properly form until the age of around two years old.

Since Chow Shepherd doesn’t naturally get on well with children and other pets, if you want to socialize your German Shepherd Chow mix this way, it’s crucial to get an early start.

Due to their needs and background, Chow Shepherds are more expensive dogs than most. They don’t often appear in shelters, so you’ll likely need to buy a Chow Shepherd puppy from a reputable breeder.

How Much is a German Shepherd and Chow Mix?

A German Shepherd and Chow mix puppy costs between $250-$750. The overall price depends on the puppy’s pedigree, as well as any possible hereditary issues (such as hip or elbow dysplasia). Adopting an older dog is usually cheaper, but it’s unusual to find a Chow Shepherd in a shelter. Buying older puppies can also be a cheaper option, but once again, they’re difficult to find.

How Much Does it Cost to Raise a Chow Shepherd Mix?

For day-to-day expenses, such as food, toys, grooming, supplies, and more, you will pay around $920 to $1000 a year. For medical expenses, you should expect to pay between $485 and $600 yearly for your Chow Shepherd.

Your medical and non-medical expenses for your Chow Shepherd will add up to around $1405 to $1600 a year, not including the initial cost of buying your dog.

Should You Get a German Shepherd Chow Mix? 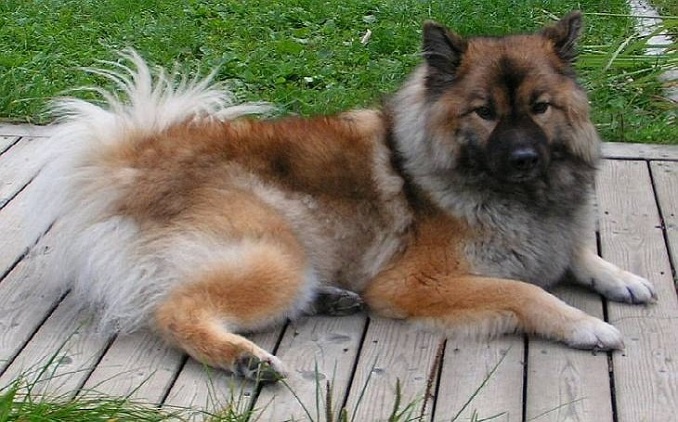 Chow Shepherds are intelligent, beautiful, and loving dogs. However, they’re not a perfect fit for every family. These dogs won’t thrive under all circumstances, and there is plenty you should consider before bringing home a Chow Shepherd.

Chow Shepherds are Suitable For:

Chow Shepherds thrive in active households, preferably with no other pets or small children. They need regular exercise, and their ideal home is a house with a large yard. However, they can adapt to apartment life, as long as they’re taken out for exercise regularly. This isn’t ideal, and you should carefully consider your circumstances before bringing a Chow Shepherd into an apartment.

Chow Shepherds are NOT Suitable For:

Chow Shepherds have a lot of energy and need plenty of vigorous exercise. This means that they’re not suitable for families or owners with limited mobility or energy, and they’re not ideal for people living in apartments.

Due to their thick, dense coats, Chow Shepherds aren’t recommended for people with allergies. They shed heavily, with extra seasonal shedding, and require plenty of brushing and grooming. Your home is going to be full of dog hair, even with plenty of cleaning and vacuuming.

If you’re interested in learning about other German Shepherd mixes, check out the hybrid dog breeds below.