Peabody Award-winning filmmakers Mark Deeble and Vicky Stone and their small, dedicated team spent two years of their lives camped out at a waterhole in Kenya to record life at Africa’s great wildlife meeting place. NATURE’s Sr. Audience Engagement Specialist Chelsey Saatkamp spoke with Mark and Vicky about their experience working on the film.

NATURE’s The Elephant and the Termite premiered on Wednesday, November 3, 2021, and is now streaming on pbs.org/nature and the PBS Video app. 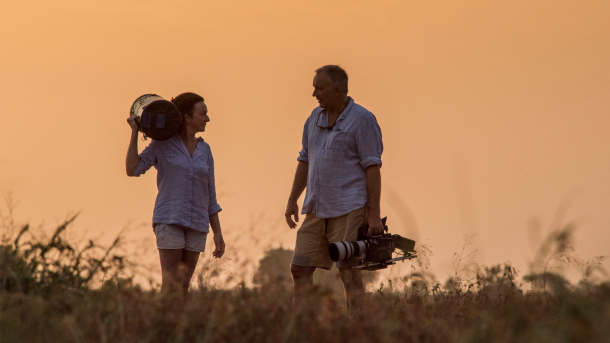 I read the background of how you made this discovery of the connection between the termite mounds, the elephants, and the waterholes. So fascinating! Can you tell us more about the discovery? How long did it take to get definitive answers from scientists that this was a real phenomenon?

It was a revelation to us. It was based on casual observations we had made over the years of filming in Tsavo and then finally having that coalesce into a question that we could address. Once we had it, we had something we could investigate. It took weeks to make contact with the scientists – some we were unable to reach as some had died or retired. However, when we did, it was like fitting together pieces of a jigsaw puzzle to reveal a picture.

How many published works have there been on this connection? What’s the latest research?

It’s difficult to say – probably a dozen or more looking at different aspects of elephant geophagy wrt termitaria, etc. We probably missed some as much of the original research was done 50 or more years ago before the internet and hasn’t been digitized. We sense there is less pure wildlife ecology research now as it tends to be much more geared to current issues like wildlife management, However, the pure research is still valid, and sometimes it is not until decades later that it becomes relevant – we just don’t realize it at the time. If today, new areas were to be gazetted for wildlife protected areas, there would be a strong argument to include mineral-poor areas with a high concentration of termite mounds as the seasonal waterholes that are associated with them enhance the area’s biodiversity – so pure research might feed into management plans even half a century later.

I think it is the smaller animals that intrigue us the most as often they have stories that are either totally unknown or if known, have never been told before. So often it is about spending years on a film, which allows those stories to reveal themselves. Aestivating lungfish can be found in the dry season’s cracked pans as they leave an airway clear to the surface, leaving a characteristic depression in the mud when it dries. Once you find one, it can be marked for later – they are often targeted and eaten by people too. They are exciting as there is much more to film with them that hasn’t been seen before. For example, they have fascinating spawning behavior and protect their your fiercely against predators.

Similarly, how does your process differ when shooting larger animals versus smaller ones?

We often film larger animals from specially adapted, open-sided bush filming vehicles – they act as mobile blinds. Sometimes, to get a lower angle, we excavate holes to bury metal blinds down into the ground at places we know animals come to drink – this allows us to film at elephant toe-nail height. Sometimes we’ll bury a remote camera to get a small animal’s point-of-view of a larger animal walking above it.

For some of the smaller creatures, like insects, we’ll build sets in the bush and for the smallest, we have a portable macro-bench that we set up in the field so we can film in almost microscopic detail the scales on a butterfly’s wing or the development within a tiny fish egg. Wherever possible we like to create a feeling of immersion or intimacy with our subjects, so if filming a dung beetle, for example, we like to get down at its eye level to give it as much presence as we might achieve with the larger protagonists. If the action is good, rather than use fast edits to give the impression something’s happened, we prefer to let shots run to give the audience the feeling of satisfaction of having experienced for themselves.

What else surprised you while shooting this film? Did you have a favorite moment?

There are always surprises – some of which we never filmed but just filed away for an occasion in the future. This time, in the middle of filming, there was a huge butterfly migration of Brown-veined whites over a front of more than a hundred kilometers, which only tangentially was part of the waterhole story. We didn’t have time to fully investigate it – why for example did the butterflies always fly against the wind? Surely, it must use much more energy? – perhaps they sensed food for their larvae in that direction? Or perhaps that was the direction the rain would come from. They even flew over the ocean – millions of butterflies for days at a time!

Events like the fishing spiders ambushing bullfrog tadpoles we could never have expected or researched in advance – we still don’t know if it has ever been recorded before – likely not. We just noticed it one day as we were walking through the grass in a waterhole while looking for elephants. We could so easily have missed the spiders skating on the surface or disregarded it rather than stopping to wonder why they were behaving that way.

There’s always a sense of achievement when we finish filming. We don’t target specific research projects to film known behavior which is how most wildlife films are made – we tend to base our camp for two years in place which we hope will provide us with a story. We have to work things out and interpret events as they unfold and then ensure we capture them on film – it’s a relief when we think we have all the material we need to tell the story!

The post Behind the Camera: Q&A with “The Elephant and the Termite” Filmmakers appeared first on Nature.